Author of Murder in Absentia 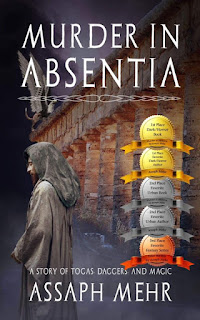 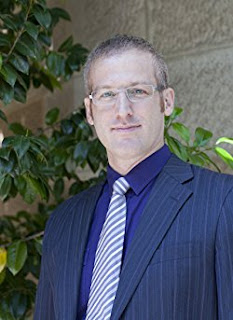 I have always been fascinated by ancient Rome, from the time I was in primary school and first got my hands on Asterix. This exacerbated when my parents took me on a trip to Rome and Italy - I whinged horribly when they dragged me to "yet another church with baby angels on the ceiling", yet was happy to skip all day around ancient ruins and museums for Etruscan art.

A few years ago I randomly picked a copy of a Lindsay Davis' Marcus Didius Falco novel in a used book fair. I fell in love with Rome all over again, this time from the view-point of a cynical adult. When I decided to sit down and write a novel, the setting was clear in my mind.

---
Assaph now lives in Sydney, Australia with his wife Julia, four kids and two cats. By day he is a software product manager, bridging the gap between developers and users, and by night he's writing - he seems to do his best writing after midnight.

Hey Assaph, What made you decide you wanted to write?

Always wanted to, just never thought I’d do it before retirement. Then one hot night in January (it’s Australian summer) two years ago, my wife complained that she has nothing left she wants to read. So after everyone was in bed, I sat down and started to write – and didn’t stop until I finished the manuscript for Murder In Absentia.

In terms of writing? The list is too big to make it justice… I grew up on classic sci-fi and fantasy. Read plenty of detectives and thrillers. Loved ancient Rome since my first Asterix.

These days it’s authors on a range from such as Neil Gaiman to Boris Akunin, from Ruth Downie to Jim Butcher.

My stories are subtitles as “Togas, Daggers, and Magic.” They draw in equal amount on my love for ancient Rome, Hard-boild Detectives, and Urban Fantasy.

Most of them. Felix, the protagonist, is a bit miserly. He’ll never pass on free lunch, and tends to abuse his employer’s expense accounts. He’s not fussed about morals in general. Of his two cronies in Murder In Absentia, while he will never utter a swear word, the other uses them as punctuation.

Then there is Araxus, with his cursed mind and independently wandering eyes…

I certainly wouldn’t want to be the griffin!

I’d probably love to be Felix. He’s a bigger and better extension of me, after all. Though I wouldn’t want to live in his world, doing what he does. Too many narrow escapes, too many trips down the sewers.

Ewww.
If you could disappear in any story, (aside from your own) which would you choose?
Ooh, something utopian. Nice comfortable meadows and an immortal lifespan to read all the books I want to read. Would be boring to read about me, but I’d be happy.

I laugh.
Your lost in that story right now. Which character are you?Oh, we’re doing it this way, are we? I’d pick Eric Klein’s upcoming book, The One, and his protagonist BJ Armstrong. There is a LOT to be said about a world where 3D printers can fix you faster than any surgey today.

Because, as I said, I do appreciate my modern niceties, like medicine and hygiene. The worlds I usually read about are a lot more gritty. Something with advanced technology, but not too far ahead so I lose myself. And I think I’d get along quite well with BJ and his life style.

A unicorn, to ride all the maidens…

Oh, it’s the other way around, you say? Never mind…

Sorry, you can't win them all.

Demon. They get to meet a lot more interesting people.

Fairy. Not enough warts for a witch.

Air! I dream of flying.

Why can’t I have both? Which I do, actually. Living on the edge of the suburbs, working in the city with access to everything, and taking frequent drives in the country.

I do too, actually.
Candy or Cake?

Ah, you're out!
Black or White?
Are merely an illusion. Life is made of shades of grey. (Or grey shades, if you read my latest short story).

That should be fun. Check it out everyone. While the price is right.
Coffee or Tea?

Coffee mostly, but I’m not averse to the occasional cup of tea.

Walk on the moon.

Lots and lots! Some of them even written by me…

I’m close to finishing the second full-length Felix mystery. By the time you read this, I’ll probably be deep in edits. It’s titled “In Numina” and the subtitle is “A story of haunted houses and house-hold gods”.

How about an Amazon page?

Murder In Absentia on Amazon: http://amzn.to/1XbfKN1

I’ll take my Scotch like my women – single (malt) and of legal age. Two fingers, neat. I can also be bribed with a good martini.

It’s was great having you Assaph. Thanks for joining me today.

Thanks much for hosting me!