Genre: Fantasy / Paranormal Romance Publisher: Adom Sample Date of Publication: March 15, 2020 Word Count: 88,500
Cover Artist: OA Book Covers
Where There Is Love . . . Death Follows.
Those in power are suppressing the truth, and it all stems from the Coven of Vampyres strict law: Human and Vampyre fraternization—strictly forbidden. When living in a society where love, passion, and desire are restricted it isn't long before someone dissents. I just never thought that someone would be me.
The day I met him, the vampyre Sebastian of Orias, everything changed. Never in my life did I think someone like him, the son of a Count, would pursue a human like me. But he did. He stalked me . . . and now he wants me.
We chose to break the rules, defy the Coven, and embrace this connection, regardless of the dangers that may unfold. However, I fear that our passion may reveal secrets the Coven is willing to kill to protect.
Free…
Post a Comment
Read more

Delve into these dark and twisted tales by twenty USA Today and International Bestselling Authors.

No matter what kind of crime story typically catches your imagination, there’s sure to be something for everyone.

Conspiracies, political plots, and yes, even murder, are just a few of the crimes waiting inside this box set.

Discover a narcissistic grandmother running an underground syndicate, or a support group bent on murder…and even a serial killer who turns his victims into fairytale creatures.

Uncover the passion, jealousy, and fear lingering in every tale.

This box set is packed with thousands of pages that will hold you on the edge of your seat, crying for answers.

Definitely a must for fans of Patterson, Lee, and Grisham.


McKenzie Taylor worked hard building his successful architecture business from the ground up. Now, after five years of marriage, he is ready to start a family.

Sharon, his wife, feels neglected and doesn't agree with him. She feels that a child would only complicate things. After all, if McKenzie doesn't have time for her, how will he be there for his child?

Feeling lonely and craving attention, Sharon confides in Byron Jefferson, one of McKenzie's clients. He seems perfect, giving her all the attention, she’s been longing for in her marriage. But is the grass really greener on the other side?

As McKenzie struggles to make things right between them, he notices changes in Sharon and hires a private investigator. To his dismay, he finds out that Sharon is not the woman he thought she was. Will he forgive her and salvage their marriage, or will he seek reveng…
1 comment
Read more

A Heart of Salt and Silver by Elexis Bell - Dark supernatural high fantasy romance - With eternity on the line, is love worth the risk? 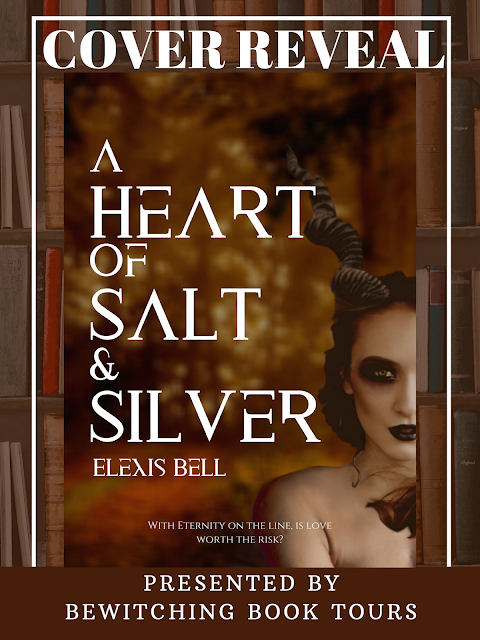 A Heart of Salt and Silver by Elexis Bell
Genre: Dark supernatural high fantasy romance
Date of Publication: 11/3/2020 Cover Artist: Elexis Bell
With eternity on the line, is love worth the risk?
Ness, a demi-demon with a conscience, just wanted a peaceful afternoon in the Forest of Immortals. But Elias, a reckless mortal, went and spoiled it. Not that he wanted to be chased by psychotic vampires.
After saving his life, Ness agrees to help him find his estranged father and his Pack. But that means facing Nolan, the werewolf ex that holds her heart.
Now, Ness must decide. Use Elias to forget Nolan at the cost of his soul or crawl back to her ex and hope he still wants her even though she broke his heart.
But in a world sprinkled with immortals, broken hearts might be the least of their worries.
Fans of gritty fiction, compelling romance, and imaginative takes on magic and the afterlife will love this dark supernatural high fantasy romance.
Amazon Excerpt:
With my good arm, I pull my leg up to bend …
1 comment
Read more

Saddleback Ridge Finding Forever by Milan Wilson - Welcome to Saddleback Ridge. Here Stetsons are a way of life and not just a fashion statement. Cowboys, romance, and small-town charm guaranteed.

Saddleback RidgeFinding Forever by Milan Wilson
Welcome to Saddleback Ridge. Here Stetsons are a way of life and not just a fashion statement. Cowboys, romance, and small-town charm guaranteed.
She’s a city girl, he’s a rancher – will a kiss seal the deal?

Ford has taken over the family cattle operation

He planned a weekend of riding fences

She’s there to make a deal

Business is on the table

But their hearts are on the line

The attraction is instant

Everything falls into place

But when the deal goes south

About the AuthorMilan is a fun-loving, witty, and entertaining writer of contemporary small-town romance. She has known her husband since she fell in love with him at fourteen, and has been an incurable romantic ever since. She lives on a farm with her husband, two sons, seven dogs, two cats, countless sheep, and a horse. Being a wife, a mother and a writer prove for a crazy life, one that she incorpora…
Post a Comment
Read more

LESSIA Eluramance Chronicles Book One by Lucas Ryan Maloney - Fantasy - A war is brewing between demonic forces and the peoples of Eluramance...

Genre: Fantasy
Publisher: FriesenPress
Date of Publication:
Number of pages: 342 Word Count: 91,727
Cover Artist: Bryan Maloney
A war is brewing between demonic forces and the peoples of Eluramance...
Lessia has always wanted to be a mancer, one of the great magic-wielders of Eluramance. Her wish comes true when, in an act of desperation, she performs her first act of magic and is granted admission to the Academy of Magic.
There, she learns the skills and discipline to use her gifts for the sake of good. Upon graduation, Lessia intends to dedicate her life to the study of magic. But when her class is killed by demons and her best friend taken, Lessia is instead thrust into the war between Eluramance’s forces of good and Zavus’ evil army of demons.
Each of the races of Eluramance brings their own unique prowess to the field of battle. For the dwarves, their strength; the elves, their wisdom; the orcs, their might; the humans, their dri…
2 comments
Read more
More posts