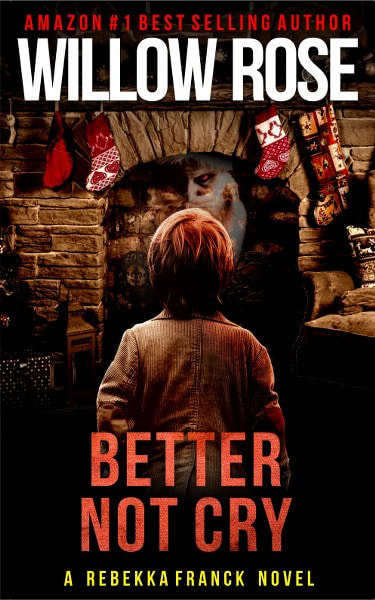 
Reporter Rebekka Franck is ready to escape the headlines for a relaxing holiday with her family. Small town Cocoa Beach, Florida seems like the perfect getaway for sunny days and silent nights. At least, until a boy’s dead body is found stuffed in the chimney…

Rebekka learns that the boy is the latest in a long line of victims preyed upon by a local legend. But a demon cloaked in red with sharp fingernails who comes down the chimney can’t be real. Can it?

With the help of a local teen whose dad fell victim to the creature, Rebekka investigates the growing body count. But as Christmas creeps closer, the reporter must catch the demon before it checks her and her family’s names off the naughty list…

Tobin woke up just as the clock stroke midnight. Eyes wide open, he stared at the ceiling. Had he heard something? Was it a sound coming from the living room? Was someone down there? Could it be? Santa!

Tobin leaped out of his bed, then stopped for a second and stared at the light coming from the closet. It had always scared him to pass it at night since he often imagined it being a gateway to another universe filled with monsters and that the portal might suck him into it like a spaceship into a black hole.

Tobin stared at the light coming from the closet, his breathing getting heavier while imagining the door slamming open, and almost feeling the suction from it.

Then he shook his head and looked away. No, he had more important things to do. If Santa was, in fact, downstairs bringing him Rocky, there was no time to waste.

Tobin opened the door and went into the hallway,bursting with excitement as he heard another noise come from the living room. It sounded like bells. And not just ordinary bells.

Santa. It has got to be Santa!
Tobin imagined Santa eating his cookies and drinking the milk while rubbing his belly and chuckling joyfully. He imagined his red cheeks getting redder from smiling so much and his beard being all white and fluffy as cotton candy.

But when Tobin reached the top of the stairs and looked down, he couldn't see anything. It was dark, but light emerged from the streetlamps outside and lit up the living room just enough for him to see that there was no Santa, there was no Rocky, and the cookies and milk were still where he had left them. Disappointed, Tobin sulked. He was about to turn around and walk back to his room when he heard another sound. Excited once again, he looked down and saw ashes falling in clusters from inside the chimney.

Tobin let out a small shriek and hurried down the stairs, closer to the chimney. A small cloud of ashes fell and filled the air. Tobin had told his mother to get the chimney cleaned for Santa, but she insisted he was used to it, that a little ash stuck inside of it wouldn't bother him much. As a matter of fact, it helped him slide down easier, she had said. But Tobin knew his mother was just saying that because she didn't want to spend money on getting the chimney cleaned. Christmas was expensive enough as it was.

Poor Santa. Struggling to get down.
Tobin stood for a little while by the fireplace, watching the ashes fall down, coughing whenever some of it hit his face, worrying that Santa might get stuck or maybe even sick.

Nonsense. Santa does this all the time.
Tobin could hardly keep the excitement inside. He was about to explode while waiting, imagining Santa handing him Rocky and how he was going to play with the dog all night and never go back to bed.

Tobin stared at the chimney as the movement inside of it stopped. No more ashes fell, no more sounds came from inside of it.

He dropped to his knees and peeked inside. It was pitch dark in the chimney. A lump of ashes fell on his face and he spurted and coughed and pulled his head away, then wiped it off. He waited a few seconds more for Santa to come down, but still, nothing happened. Once again, Tobin peeked up into the chimney to see if Santa might be stuck further up. He couldn't see Santa, but he could see a set of red glowing Christmas globes.

There was something about the eyes that made him back away, and that was when a voice from inside the chimney, said: "Hello, Tobin."

The laughter rumbled inside the chimney. That very distinctive yet familiar laugh that could only come from one particular person.

Tobin's face lit up. It was him, he was really here inside Tobin's chimney. But why wasn't he coming down? Why wasn't he already in the living room, eating cookies and drinking milk? Was he stuck in the chimney and couldn't get down? Was he hurt? Had he brought Rocky?

Tobin dropped to his knees again, crawled closer this time, and peeked inside again. The red glowing Christmas globes stared back at him. They were sparkling in the darkness. Tobin smiled.

"Did you bring Rocky?"

"I sure did," Santa said, his voice as deep as thunder.

"Why don't you come a little closer, so you can see him?"

Tobin did as he was told and stuck most of his head into the chimney.

Tobin crawled. His fingers were getting black from soot.

"A little more, just a little bit and you're there."

It made Santa laugh his hearty, deep, merry laughter. It seemed to make the entire chimney shake.

Tobin smiled and crept closer still, soot on his face and arms and on his new pajamas that his mother was so fond of. It didn't matter, he thought to himself since soon he would have his puppy; soon, Rocky would be with him, and the pajamas could be washed and so could he.

"Reach out your hands, Tobin," Santa said and Tobin did as he was told, thinking only of Rocky and all the hours they were going to play together. "Both of them.”

Tobin stretched his arms up and felt Santa's hands grab him, his long thin fingernails piercing into his skin. Tobin didn't even manage to scream. He was pulled up into the horrifying darkness and never saw daylight again.


And worst of all, he never got to play with Rocky.

The Queen of Scream aka Willow Rose is a #1 Amazon Best-selling Author and an Amazon ALL-star Author of more than 40 novels. She writes Mystery, Suspense, Horror, Supernatural thrillers, and Fantasy.
She lives on Florida's Space Coast with her husband and two daughters. When she is not writing or reading, you will find her surfing and watch the dolphins play in the waves of the Atlantic Ocean.

Willow's books are fast-paced, nail-biting pageturners.
Several of her books have reached the Kindle top 20 of ALL books in the US, UK, and Canada.
She has sold more than two million books.