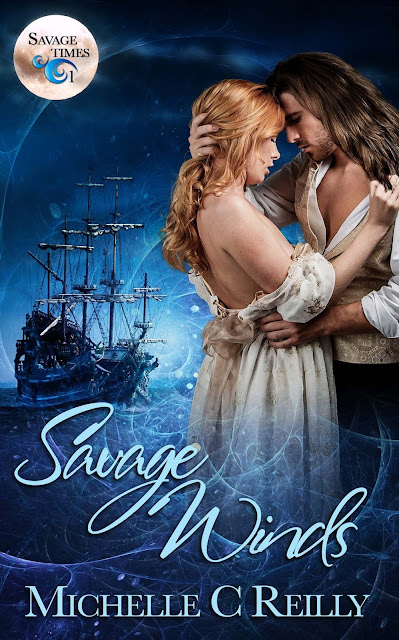 
War, Pirates, Nor The Savage Winds of Time Will Keep Them Apart

Ana Salvatore, a marine biologist, wants nothing more than to have an independent life free of her mobster family. While on an excursion in the Bermuda Triangle with her uncle, his boat explodes, and she wakes to find herself in the arms of gorgeous Captain Jacen Stirling on an ancient ship. It's like a fairytale, until he tells her the year is 1814.

Jacen is on a secret mission for General Andrew Jackson to infiltrate the infamous privateer Jean Lafitte’s encampment to determine his loyalties. When he discovers Ana while on his way to meet Lafitte, he can’t decide if she’s the worst thing that’s ever happened to him, or the best.

As the Battle of New Orleans draws nearer, can Jacen and Ana work together to help their country beat the invaders? Or will the British, the war, or the savage winds of time keep them apart?

An Interview with Michelle C. Reilly

Tell us about your newest book.
SAVAGE TIMES is a time travel romance. It begins in modern day with Ana, who’s having fun with her uncle in the Bermuda Triangle. Something happens and she’s thrust back in time during the 1812 war. Captain Jacen Stirling comes upon her. He’s enthralled by her, but has a lot going on, so isn’t quite sure what to do with her. General Andrew Jackson has assigned Jacen to a secret mission to infiltrate pirate/privateer Jean Lafitte’s inner circle to confirm the pirate’s tale that the British asked him to join them to attack the U.S. The upcoming Battle of New Orleans isn’t the only battle that takes place in this story. There’s the battle of these two coming to terms with each other, and the many obstacles that could prevent their happy ever after, including the savage winds of time.


Writing isn’t easy. What was the most difficult thing you dealt with when writing your newest book?
The research for this book was the most difficult part. I love learning about history, but I hadn’t realized that for some scenes, at least an hour’s worth of research would occur for every three sentences. I even visited the area where the Battle of New Orleans took place. It was a challenge and an adventure.


Tell us a little bit about your writing career.
I’ve always been a day dreamer and stories constantly run through my head. This book was my first go at true writing. I started it back in 1990. I completed the first three chapters, and sent them off for submission via snail mail. I, of course, was rejected. Right after that time frame, my life completely changed. I wasn’t able to seriously think of writing again until 2006. That is when the entire concept for my Anathergians (a sci-fi/paranormal saga) came to life. In 2013, I had to decide if I would write my Anathergians, or SAVAGE WINDS. I decided on the Anathergians, and then started over on SAVAGE WINDS in 2015.


They say Hind-sight is 20/20. If you could give advice to the writer you were the first time you sat down to write, what would it be?
Write. Even if your life is crumbling around you, write at least ten minutes a day. I wish I’d never stopped way back in 1990. If I’d kept at it, who knows where I’d be now?


What was your most difficult scene to write?
There are some scenes where some pretty bad stuff happens to Ana. Those were difficult to write.


Are themes a big part of your stories, or not so much?
Not really. Honestly, the characters drive my story, and what’s happening around them. Just like true life.


What are you working on now?
I completed the first YA book for a series related to my Anathergians Saga and am submitting it now. I’m also working on the second book in my Savage Times trilogy.


Who is your favorite character from your own stories, and why?
This is a difficult choice. I love them all. They all talk to me. Each of them has something special I love about them. I can’t really choose just one.

When I was in third grade, my teacher wrapped books as presents for Christmas, and I got A Wrinkle in Time. At that time, I had never owned a chapter book. I devoured that book, and checked out the rest of them from the library. I read them over and over again. I couldn’t get enough. I am so excited for the movie!

I will complete the Savage Times trilogy, but I also have some other romances planned. I’m hoping to use some of my military experience in some of them, so they’ll be contemporary.


Is there anything you would like to add before we finish?
I hope everyone who reads SAVAGE WINDS enjoys the story. It’s been inside me for a long time, and it holds a special place in my heart.


Good luck with your newest release, and thank you for being with us today.

Keep scrolling for an excerpt from Savage Winds

The latch lifted and Captain Jacen Stirling entered. When he turned to shut the door, she noticed the captain’s own pants had the same double rows of buttons hers had. She made eye contact and found him staring at her with a stone face. Her mouth dropped open, and she stuttered as she realized he’d noticed where her gaze had been.

“I was… It’s your pants… And mine, too. They’re, like, really old-fashioned.”

He glanced down at his black britches. “My trousers aren’t, I admit, at the height of the Parisian

fashion standards, but since we are currently at war, I believe priorities are in order.”

She blinked. “I know I’ve been busy finishing up my doctorate, but I hadn’t realized things had become

so much worse in the Middle East that they’ve affected fashion trends.”

“Do you speak of war? In the Middle East?”

“Uh, yeah… The last time I checked. Why? What war are you referring to?”

He stood taller. “I speak of war with Great Britain and their continued efforts to prove our young country isn’t valiant enough to stand on its own.”

He gave a curt nod.

“That war ended some time ago. I speak of our current situation that began in 1812.”

“1812?” She suddenly felt like she was watching the final round of Wimbledon and each opponent kept

gaining the edge to win, only to lose it again. “As in one-eight-one-two?”

“No,” he scoffed. “As in one-nine-one-two. What bloody year did you think I was referring to?”

“Oh, you know, nothing like referring to a war that took place over two hundred years ago,” she said dryly.

He froze, and the edges of his lips rose in a grin. “Two hundred years ago? What year do you think this is?” 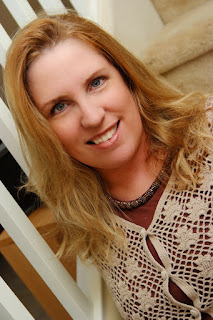 Michelle C. Reilly is a single mom of two wonderful boys. She spent ten years in the U.S. Navy as a Hospital Corpsman Preventive Medicine Technician, which meant she was actually attached to or stationed with the U.S. Marine Corps. She has a Masters in Science in Public Health, but she is generally an IT geek and a nerd of many other things as well. She currently resides in Las Vegas, NV, with her two cats, Meowdy and Moose, and her labradoodle, Sophie.

She’s self-published the Anathergians Saga, science-fiction/paranormal romance and suspense stories that revolve around a powerful alien species who landed on Earth over five thousand years ago. SAVAGE WINDS, her venture into time romance, was picked up by The Wild Rose Press. 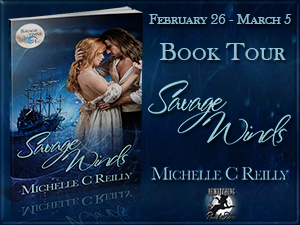