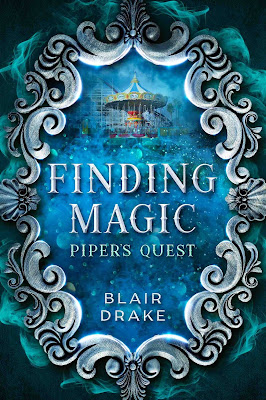 
What would you do to find your magic?

The only thing Piper is worried about, until that fateful morning, finals. She wants to graduate with good grades, and go to an Ivy League university. After being summoned to the headmaster’s office, Piper’s life changes forever.

Reunited with her long-lost aunt, Piper learns things about herself she should have known for years. Aunt Winnie lives in a dimension parallel to Piper’s, where magic is a way of life. Now in Rowan’s Landing, Piper learns about her own abilities, and who to trust. When she trusts the wrong person, she may never return to Gray Cliffs Academy and graduate.

The woman standing before her looked close to her mom’s age, and had wild, curly black hair sticking out in ringlets around her head. Her pale skin made the dark circles around her eyes look even darker. Piper would have looked closer at the woman’s eyes, but they looked black and scared the crap out of her.

This was Hell, she just knew it. She’d been a terrible brat all her life, but she didn’t think she deserved to go to Hell when she died. This has to be a mistake. But Hell sure had a nice bathroom, even with the stinking liquid on the floor. She’d be a good girl if only she could get out of Hell.

Looking the woman up and down, as the woman did the same to her, Piper marveled at her tiny waist, cinched in with a corset. She wore a black dress of a fine fabric Piper couldn’t name, with red satin at her bust. And what a bust it was, with the flesh pushing out the top of the dress.

Piper watched the lady’s red lips as she repeated, “Piper? Is that you?”

The woman grabbed her by the shoulders and turned her around. “Look at you. What a fine girl you’ve grown into.”

Piper’s expression would be one of confusion, but she couldn’t manage anything more than a blank stare.

“Are you okay? You look dazed.” The woman looked around Piper, toward the bathroom. “What were you doing in there? Your bum is wet.”

Piper finally found her tongue. “Who are you?”

The woman’s lips curled up at the corners. “You are Piper Cavanaugh, aren’t you? Cuz you sure look like her.”

“I thought we already established that.” Piper mentally slapped herself. She was supposed to start being good, so she’d be moved up.

The woman opened her arms wide and Piper thought her boobs might spill out from the fabric. “I’m Aunt Winnie, sweetheart. Don’t you remember me?”

Aunt Winnie? How would she remember her? It had been too many years since she last saw her, and that was only for a moment. They hadn’t even talked.

“Aunt Winnie? Where am I? And what’s happened?” Piper looked around.

Winnie wrapped her arms around Piper and drew her in for a hug. “I’m so thrilled. I can’t believe you finally came to visit. I thought for sure your mom was hiding the letters. And then when I tried to find you online, nothing. Honey, don’t you even have a Facebook account?”

Piper shook her head. Winnie was happy to see her, and she knew she should be happy too, but she was too confused to be happy at the moment. “I’m…uh…”

“Come. Sit.” Winnie led her to the upholstered booth of a restaurant table. “I’ll explain what I can, or at least what I think happened.”

Piper sat on the aqua vinyl seat and scooted across to the middle of the booth. The wetness of her pants felt cold and made sliding across the vinyl feel sticky. She looked around and noticed she was in some kind of café with a beach theme.

“Where am I?” She continued to look around without looking at Winnie, who slid into the seat across from her.

The place had fifteen booths, and a dozen stools at the counter. It looked like the ‘50s cafés she’d seen in movies, except this one had deep sea fishing items on the walls, along with starfish, sand dollars, and hanging nets she assumed were for fishing, too.

“You’re in my café.” Winnie’s chest raised as she said it.

“You still have the café?” Piper remembered her mom talking about it.

From her mom’s description, it was a rundown money pit not fit to eat in. Her mom couldn’t be more wrong. The café felt like a breath of fresh air. Ocean air.

The aqua vinyl booth she sat in looked new. She could smell the fabric, almost like new car smell. The tables were covered in pristine white linen clothes with matching white linen napkins she assumed were wrapped around silverware. She reached forward to touch the violet flower in the lead crystal vase.

“That’s a blue violet. It brings love and inspiration. But I keep them on the tables to protect my guests from all evil.” She plucked a flower and handed it to Piper. “Carry this for protection and good fortune.”

Piper accepted the flower. “Thank you, it’s lovely.” She held it between her fingers, taking in the graduated colors of the five petals. She didn’t want to put it down, but she tucked it in the breast pocket of her shirt.

“Press it between the pages of a large book when you get a chance. Then you’ll be able to keep it forever. But do it soon, before it wilts.” A bell chimed behind her, and Winnie’s gaze moved to the door of the café.

Piper looked over her shoulder. When she did, she almost forgot she had a crazy morning.

The guy who just walked in the door looked like he was her age. His athletic build made her body warm, but it was his dark, brooding eyes she locked onto. And he looked back. The smell of salt air flowed in with the guy, and Piper breathed deeply.

Aaron, Piper thought. Yes, he looked like an Aaron. He looked like he could be anyone he wanted to be, and the girls probably hung on his every word, drooling over his strong facial features and muscular arms. She wondered what his tanned skin looked like under the knit sweater and canvas vest he wore.

“Hank said he called in an order and asked me to pick it up.” Aaron shoved his hands in his pockets and smiled at Piper.

“I’ll be right back, honey. Hang tight, and I’ll explain everything.” Winnie jumped up from the booth like she’d been stung. Her stride looked broken, like she was fighting something as she disappeared into the kitchen of her café.

Not wanting to be obvious with her interest, Piper turned away from Aaron and looked out the window.

From her vantage point, she saw the café sat at the end of a wharf of some sort. Aunt Winnie lived near the water? Did she live on the island, and somehow the winds blew Piper to her café? No, wait, she’d landed in the bathroom. She cringed at the thought of what was on her pants, and what might have been on her hands. She really hoped it was just water.

She felt the air move behind her, and when she turned around, Aaron stood so close she could reach out and touch him. He smelled sweet and salty, with a hint of ash.

“I thought I knew every pretty girl in town. I haven’t seen you before.” His wide smile was infectious.

It took Piper a second to break her gaze from his eyes and find her manners. “Oh, hi, I’m not from here. And I just got here. I’m Piper Cavanaugh.” She reached out to shake his hand.

Her entire body felt the jolt as he took her hand in his. It wasn’t the “love at first sight” kind of jolt like she read about in romance novels. This was an overpowering energy disappearing as soon as he let go of her hand.

“Aaron Payne. I’ve lived here forever, so if you need to know anything, I’m your guy.”

Winnie reappeared with a white bag. “You’re not anyone’s guy for anything here.” She shoved the bag of food at him. “Now run along before the food gets cold.”

Aaron didn’t even look back at Piper as Winnie practically shoved him out the door.

When she came back to the table, she sat again. “There are much better people to get your information from. Aaron is trouble.”

Blair Drake believes in magic, especially the magic of stories with fantasy, adventures, romance, action, and surprises. She has loved writing and living in the stories of the Finding Magic series and is so excited to share the quests of the Gray Cliffs Academy students with her readers.

When she’s not writing about magic, she’s reading about it. Her influences are Cassandra Claire, Neil Gaiman, Rick Riordan, Garth Nix, and many more.

In the mortal plane, following the lure of magic has drawn Blair into strange and wonderful adventures from Australia to New York City, with many stops in between. She currently lives near Denver. Her very favorite spot is a red loveseat in her office, frequently shared with two cats, an outnumbered Dalmation, and occasionally her bewitched husband.

She might have gone to a school similar to Gray Cliffs Academy and would love to go through a magic portal. In the meantime, she’s creating her own in more books of magic. 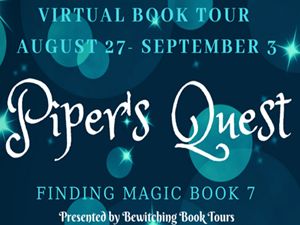