Showing posts from December, 2017
Show all

Wolf of the Tesseract by Christopher D. Schmitz Genre: SciFi Fantasy 227 pages While investigating a series of strange murders in her neighborhood, college student Claire Jones is kidnapped by a handsome werewolf who claims he’s rescuing her from the clutches of an evil sorcerer. But she can’t run forever and if Claire and her companion can’t reclaim an arcane artifact to end the warlock’s reign of terror, he will unleash the dark god Sh’logath’s cataclysmic power upon the universe, shattering dimensional barriers, and devouring all reality. **FREE on Amazon Dec 28th- 30th!** Get it HERE! Add to Goodreads About the Author Christopher D. Schmitz is the traditionally published and self-published author of both fiction and nonfiction. When he is not writing or working with teenagers he might be found at comic conventions as a panelist or guest. He has been featured on cable access television broadcasts, metro area podcasts, and runs a blog for in
Post a Comment
Read more

Better Not Cry Rebekka Franck Book 8 by Willow RoseGenre: Mystery, Supernatural Suspense He stalks you when you’re sleeping. He kills when you’re awake… Reporter Rebekka Franck is ready to escape the headlines for a relaxing holiday with her family. Small town Cocoa Beach, Florida seems like the perfect getaway for sunny days and silent nights. At least, until a boy’s dead body is found stuffed in the chimney… Rebekka learns that the boy is the latest in a long line of victims preyed upon by a local legend. But a demon cloaked in red with sharp fingernails who comes down the chimney can’t be real. Can it? With the help of a local teen whose dad fell victim to the creature, Rebekka investigates the growing body count. But as Christmas creeps closer, the reporter must catch the demon before it checks her and her family’s names off the naughty list… Better Not Cry is a spine-tingling Christmastime horror story featuring Willow Rose’s iconic characters Rebekka Franck and Jack Ryder.
Post a Comment
Read more

No Quarter: Wenches - The Complete Series, by Authors MJL Evans and GM O'Connor 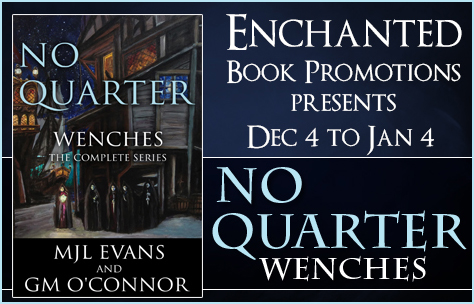 Title: No Quarter: Wenches – The Complete Series Author: MJL Evans and GM O’Connor Genre: Historical Romance Behind every successful pirate is a cunning wench! In 1689, Atia Crisp finds herself imprisoned in the wickedest city on earth, Port Royal, Jamaica, while the refugees from Strangewayes’s plantation in the Blue Mountains are on the run and seeking a new home, deep in the Caribbean. Captain Jean-Paul la Roche must get them to safety and find a way to liberate the woman he loves while waging a war against the English with the pirate Laurens de Graaf. While besieged people suffer and starve, a group of women form a secret and illegal society deep from within the bowels of the city called: WENCH. A network that deals with smugglers, merchants, cutthroats and thieves. Dragged into the struggle for supremacy of the Caribbean, the women are divided and find themselves engulfed in bloodshed. The pirates of Port Royal and former enemies may be their only hope of escape. Contains Volum
Post a Comment
Read more 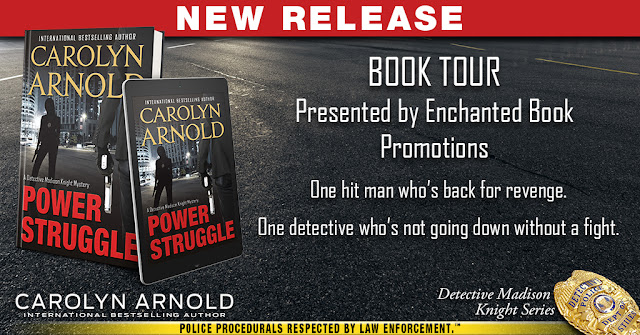 About the Book Title: Power Struggle Author: Carolyn Arnold Genre: Mystery One hit man who’s back for revenge. One detective who’s not going down without a fight. It’s been ten months since Detective Madison Knight almost died at the hands of Russian Mafia hit man Constantine Romanov. She hasn’t seen hide nor hair of him since he escaped police custody and fled to Russia soon after his arrest, except now her latest murder investigation gives her reason to believe he’s back in town. Seeing as the victim is the man who killed her grandfather, her perspective may be a little skewed, but with the MO smacking of Constantine and the victim’s connections to the mob, she finds it hard to be objective. Still, she’s doing her best to consider all the evidence. When she receives a threatening letter from Constantine, however, her suspicions are confirmed. And he’s made it abundantly clear that not only does he plan to finish what he started but he has her family and loved ones in the
Post a Comment
Read more

Red Sleeper The Berlin Fraternity Universe Book Two Brian Downes Genre: Historical horror Date of Publication: December 1st, 2017 ISBN-13: 978-1978447349 ISBN-10: 1978447345 ASIN: Number of pages: 450 Word Count: 118,766 Cover Artist: Miriam Medina A cold war after dark. In the horsepower town of 1950s Detroit, FBI agent Christopher Haigwood is raising his Catholic family and hunting Soviet spies. Then a communist fanatic who was arrested with a lot of guns, dynamite, and heroin breaks out of jail right before his eyes, and Haigwood is plunged into a terrifying labyrinth of plots, informants, liars, and the horrifying revelation that vampires are real, and that some of his KGB quarry are undead. Red Sleeper is set in the world of The Berlin Fraternity. Amazon Excerpt Haigwood had read Walter Swale’s file several times. He’d written sections of it. White. Brown eyes, brown hair, approximately 5’6”, 175 pounds estimated weight. Father born in Poland, 1893, changed the family
Post a Comment
Read more 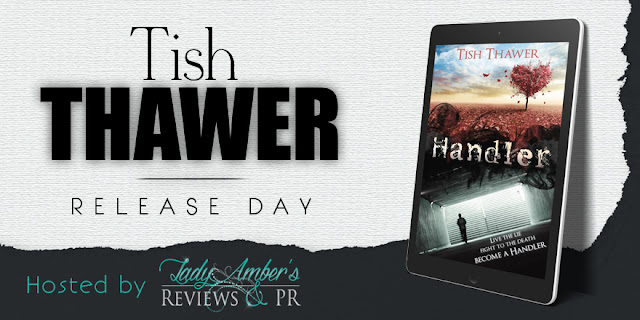 Title: Handler Author: Tish Thawer Genre: Sci-Fi Dystopian Publisher: Amber Leaf Publishing Cover Designer: Emma Michaels Hosted by: Lady Amber’s PR Our world was perfect––until we broke the law: Don't go out at night. Utopian by day, dystopian by night; this is the world I recently discovered. I now struggle with the fact that our whole society has been based on a lie. There's only one way to change it––conquer the darkness we've all been raised to fear. Live the lie; fight to the death; become a Handler. It's the only way. A sci-fi/dystopian novel Add to Goodreads An Interview with the Author of Handler Tish Thawyer Welcome to JB’s Bookworms with Brandy Mulder  Tell us about your writing career. How long have you been writing?   I published my first book, Scent of a White Rose (a new adult vampire paranormal romance) in 2011, so that makes seven years as of January 2018. How did you choose your genre?   I grew up wa
Post a Comment
Read more

Jewel of the Gods by Author Mary Bernsen - Excerpt - Giveaway

Jewel of the Gods Mary Bernsen (Beyond the Gods #2) Published by: CTP Pulse Publication date: December 19th 2017 Genres: Adult, Fantasy, Mythology, Romance Sold at the age of seventeen to the king of the realm, Ursula has spent the last four years serving as his submissive concubine. She has grown to love him with a fierce loyalty, but when he orders her to kill a spirited young girl, she simply cannot obey.Her master does not take defiance lightly, so Ursula must find the girl she spared and return her to the king—or lose her own head. Her search leads to the girl’s former employer, a handsome man who introduces Ursula to a world of experiences and freedoms she has never known. Though thrilling and intoxicating, she knows this new lifestyle is only temporary.She must finish her quest and return to her master…before this new, softer kind of love has her questioning everything. Jewel of the Gods is the second novel in the fiery and passionate Beyond the Gods series by Mary Bern
Post a Comment
Read more

Tainted Lies Leona Nation (Dream Walker Division Novel) Publication date: December 22nd 2017 Genres: Adult, Science Fiction, Thriller When you’re a spy with special abilities, you do what you must to save the ones you love—even if that means killing. Jade didn’t choose this life, it chose her. Twelve years ago, Assassins forever changed Jade Saito’s world with flames and bullets. She was saved by the Dream Walker Division, a covert branch of the CIA consisting of people like her—agents with the ability to dream themselves into another’s reality as unseen observers. They also happen to be stronger, faster, and have photographic memories, making them optimal spies. Now Jade is a field agent for the DWD where she and her unit use their abilities to take down criminal organizations. When DWD leaders start turning up dead, the compound is shaken to its core. If the leaders of the DWD aren’t safe from Assassins, no one is. But the deeper Jade digs the more she realizes not everything i
Post a Comment
Read more

It Must've been the Mistletoe by Author L.P. Dover - Teasers - Giveaway

It Must’ve Been the Mistletoe L.P. Dover Publication date: December 18th 2017 Genres: Adult, Contemporary, Romance Finding your soul mate is a dream Adeline Hamilton thought was just that … a dream. After several failed relationships, she realizes she’s not capable of falling in love. The only passion she’s ever had is teaching U.S. History at the local high school. A week before Christmas, Adeline is all set for her best friend’s wedding, even though she dreads having to go to it alone. But when she’s given a Christmas wish that could change her future forever, she’s whisked away to the past, to a completely different place and time. It’s also when she meets him, William Blair, the man who steals her heart. As their relationship grows, Adeline realizes that true love does exist. What she doesn’t know is that her wish can’t last forever, that soon she’ll have to leave the past behind. Will Adeline and William find their way back to each other? Or will their love have to stay whe
Post a Comment
Read more

Queen of Corona Esterhazy Publication date: December 15th 2017 Genres: Contemporary, New Adult Queen of a Corona delves into the mind of a young American adult growing up in today’s multicultural society. It is a human look at contemporary existence “from the bottom of the barrel.” It tells the story of a high school senior who is running after a student protest ends in tragedy. She is ushered onto an airplane by her mother, headed back to the land of her ancestors for the first time in her life. Her journey is both a way of escaping a seemingly dead-end existence and a chance at rediscovering herself by stepping outside the confines of societal standards. Queen of Corona is a coming-of-age novel in a dangerous age, in the age of Trump and all the forces stirring with and against the American president. Goodreads / Amazon Excerpt I bet you thought I was going to fold. That I wouldn’t be able to resist that fine china-white powder resting right there in the sanc
Post a Comment
Read more
More posts