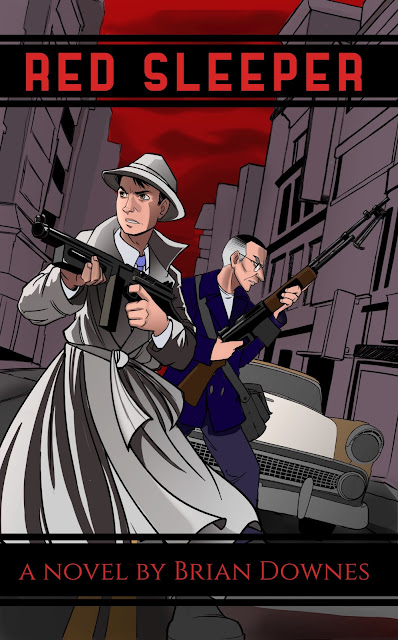 A cold war after dark.


In the horsepower town of 1950s Detroit, FBI agent Christopher Haigwood is raising his Catholic family and hunting Soviet spies. Then a communist fanatic who was arrested with a lot of guns, dynamite, and heroin breaks out of jail right before his eyes, and Haigwood is plunged into a terrifying labyrinth of plots, informants, liars, and the horrifying revelation that vampires are real, and that some of his KGB quarry are undead.

Red Sleeper is set in the world of The Berlin Fraternity.

Haigwood had read Walter Swale’s file several times. He’d written sections of it. White. Brown eyes, brown hair, approximately 5’6”, 175 pounds estimated weight. Father born in Poland, 1893, changed the family name to Swale from Szwarc on arrival in the USA. Haigwood had studied photographs of Swale to memorize the high chin, the bulging lips, the distance between the eyes, the widow’s peak that pointed out of the receding hairline. He had once sat at Swale’s kitchen table with the curtains drawn and copied names out of his address book while Swale was out at the movies. Now Swale was sitting in jail, having been brought in the night before for resisting arrest, along with possession of: four ounces Mexican heroin, ten sticks dynamite, one M1 rifle with two hundred rounds of ammunition, one police revolver with ammunition, and twenty-three copies of a Communist Party pamphlet urging workers to revolt against their bosses and their elected leaders in Washington, D.C.


Haigwood had been at home with his wife, Annie, over the Thanksgiving weekend. He’d gotten the call last night at dinner. Now he was walking into the jail at eight on Monday morning to get his first eyeball-to-eyeball with this Red they had been watching for more than six months.


There was a jail guard stationed at the front desk. Haigwood smiled at the man as he unwrapped his scarf from around his neck. “Good morning! How’s everything with you fellas?”


“Good morning,” the guard answered, looking him up and down warily. “Is it snowing already?”


Haigwood took his fedora off, tapped the snow dust off its brim, and ran his hand through his hair. “Yes, it’s brisk out there!” He pulled out his credentials. “I’m Christopher Haigwood, Federal Bureau of Investigation. I’m here to see Swale, Walter, a prisoner brought in about 2100 hours last night.”


The guard, whom Haigwood saw was about ten years younger than he was, focused on Haigwood’s ID. He reached his hand out tentatively to touch the wallet. “I heard about that. So you really work for J. Edgar Hoover, huh?”


“And the American people,” Haigwood answered with a smile. “Now do you think you could get someone to show me to Swale?”


The guard picked up a telephone receiver from a handset at his station and dialed a number. Haigwood toyed with his hat, smothered his impatient sigh, and looked around at the signs in the jail’s foyer. The signs told him to be on the alert for any men dressed in black and gray stripes, because they might be escaping inmates. And that he was going to have to surrender his revolver if he wanted to go any further. He looked out the window and saw the snowflakes floating gently downward, their numbers growing. From further inside the jail he could smell the morning coffee, but he’d just finished off a Coca-Cola in the car.


He was really angry at Swale for getting himself arrested like this. But he was very much looking forward to speaking to him personally.


A second guard appeared and took Haigwood inside the jail. This one older than him, and not shy at all about staring at the G-man with frank curiosity. He had a nametag that read, “G. Cantor”. Nobody asked Haigwood for his service weapon, so he kept his overcoat on and didn’t mention it.


“So I read this guy’s sheet,” Haigwood’s guide said indifferently as they walked.


“Yeah,” Cantor nodded, looking like he didn’t care, but watching Haigwood’s face carefully. “You know we don’t get a lot of dynamiters in here.”


“Oh, you don’t?” Haigwood put a chime of surprise in his voice.


“No,” the guard said, warming up to explaining his job to someone he had expected to be smarter than him. “We don’t get too many commies, either.”


“I guess you’ve got one today, though?”


They had been walking down a chilly, second-level row of cells as Haigwood parried Cantor’s efforts to pump him for information. It was cold enough that Haigwood was quite comfortable with his overcoat on. Morning light, turned a cottony gray by the snow coming down outside, slanted in through the high, narrow, barred windows.


Swale was up early, and had heard them coming. Haigwood could see him pressing his face up against the bars of his cell, craning his neck to see them approach. But Haigwood stopped first at the cell adjacent to Swale’s, and looked down at a little man wrapped in a blanket on one of the cell’s two bunks. “Who’s this?” He asked Cantor.


“Who, him? That’s Hobson. He stays with us sometimes, three or four times a year.”


Haigwood gestured at Hobson’s sleeping cellmate. “And what about that one?”


“That’s, uh, Gomez. Got drunk and stabbed a fellow over a game of cards.”


“OK,” Haigwood said, reassured that the two men who might overhear his conversation didn’t much matter. He told the guard, “Thank you very much, Mr. Cantor, I’ll be fine here,” as he took the final few steps that brought him face to face with Walter Swale through the bars of his cell.

Brian Downes learned to read at a young age. He is now a novelist who lives in Orlando, Florida. His other novels are The Berlin Fraternity and The Carrefour Crisis. He also writes for the website Florida Geek Scene. 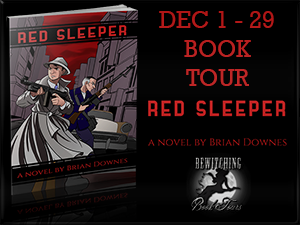