Showing posts from June, 2019
Show all

Ashes of Pride Tracy Cooper-Posey  (Scandalous Scions , #10) Publication date: June 27th 2019 Genres: Adult, Historical, Romance Married in haste, to the wrong man… Blanche wed Lieutenant Colonel Seymour in search of a hero to replace the French military father she never knew, only to find herself stranded in Northumberland, in a penniless marriage, with no recourse. Blanche’s cousin, Neil Williams, now a decorated Major, returns from the colonies to rejoin the Fifth Northumberland Fusiliers. Her husband, as Neil’s superior officer, makes Neil’s life intolerable, as well as her own. Blanche learns that the truly courageous are defined by their actions and that Seymour is not one of them, for what he does to Neil defies imagination… This book is the tenth book in the Scandalous Scions series, bringing together the members of three great families, to love and play under the gaze of the Victorian era’s moralistic, straight-laced society. This story is part of the Scan
Post a Comment
Read more

Brave The Sisterhood Series Book 1 by Chelsi Arnold Genre: New Adult Four women dared to defy the rules... Twenty-two-year-old Greer Connally believes life is about choices and consequences. When she is drafted with the first group of women in U.S. history, she is constantly challenged by those that neither want nor respect the women draftees. Greer quickly learns teamwork is the only way to endure the mental and physical abuse of training. She and her teammates must find a way to overcome their differences and learn how to work with one another in order to survive BUD/S. With the country divided, tensions mount as protests and terrorist attacks break-out across the world. Willing to sacrifice anything for their country, Greer and her teammates embark on a top-secret mission. But when the mission becomes compromised, Greer’s loyalties are quickly tested. Forced to choose between the lives of her teammates or defying a direct order, Greer must decide which consequence
Post a Comment
Read more 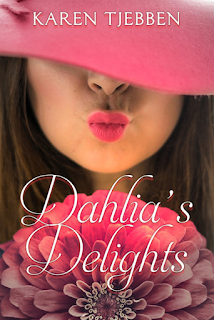 Publication Date: June 8, 2019 Genre: Contemporary Romance Book 2 in the heart-warming Flowers of Avenel contemporary romance series, complete with HEA. It can be read as a stand-alone novel.     As a teen, Dahlia Collins swore that she’d escape the sandy beaches of her little hometown of Avenel on The Hidden Banks Islands. She’d dreamt big for herself, craving the adventure and success that could only be found in a big city. But life in the big city turned tumultuous, and the overwhelming swells of betrayal and financial struggle carried her back home to Avenel. Taking over Dahlia’s Delights Bakery should have been easy for her, except it wasn’t. The bakery was bleeding money. Someone was sabotaging her business. She needed to discover the saboteur and save her bakery before her hopes and dreams were crushed.   Mark Lane was a simple man with simple needs. He had his health and a successful career as the police lieutenant on a beautiful island off the coast of North Ca
Post a Comment
Read more

The Bachelor Missions Kristian Clark and the Agency Trap Series Book 1 by Jes Drew Genre: Speculative Thriller, Espionage Romance  The good-guys, the bad-guys, and the wild card- it's the ultimate game of cloak and dagger... Kristian Clark, private eye, thought his days as a special agent were behind him, but when he's drafted into action, he finds himself reunited with his old team- and painful memories of why they broke up in the first place. But as he plunges into mission after mission- from a 'holy heist' to babysitting a young hacker to going undercover in a cult- Kristian find that everything he tried to leave behind is coming back to haunt him with a vengeance, and then some. First there's the mysterious woman who knows more about Kristian- and his past- than makes sense while using science fiction weapons that don't make sense period. Then there are the shady powers-that-be who are responsible for drafting him back into this w
2 comments
Read more

Shifter Mate Magic Ice Age Shifters Book One by Carol Van Natt a Genre: Paranormal Romance Publisher: Chavanch Press Date of Publication: May 2018 ISBN: 978-1946165077 ASIN: B07C7NHNGD Number of pages: 130 Word Count: 38,000 Cover Artist: Amanda Kelsey Pregnant and running for her life, a woman must trust a sexy bear shifter to get them both to a magical sanctuary town. A lonely bear shifter meets his mate. She’s running for her life and doesn’t have time for romance. Pregnant Jackie Breton just escaped from a corrupt feline pack intent on selling her half-shifter baby to the highest bidder. She’s smart, independent, and has a desperate plan to keep her baby safe: Get away from the pride as fast and far as possible. Trevor Hammond, prehistoric bear shifter, has been rejected by everyone in his life for… being born, basically. Well, except for the beloved aunt who raised him. He’s built a career as an independent trucker, but life woul
Post a Comment
Read more
More posts