Showing posts from February, 2018
Show all

Soul Thing The Game of Gods Book One Lana Pecherczyk Genre: Urban Fantasy Publisher: Prism Press Date of Publication: 20th February 2018 ASIN: B079FM8BF3 Number of pages: 379 Word Count: 101,989 Cover Artist: Lana Pecherczyk Evolution is the Game, Witches are the Glitch After a decade long war, witches have been obliterated, or so the world thinks. A precarious peace settles and, for the small town of Margaret River, life returns to normal, but for Roo, the hard work is just beginning. Roo works at the local bar, is a little facetious and can’t wait to high-tail it out of there to keep her powers secret. She’s not certain where they came from but the last thing she wants is to be burned at the stake. Hiding in plain sight seems to work until Cash, a darkly handsome hunter, arrives with disaster in his wake. Witches aren’t defeated, only hidden, and there’s one gunning for Roo and her family. The recent war only touched the surface of the preternatural world an
2 comments
Read more

Savage Winds Savage Winds Book One Michelle C Reilly Genre: Time Travel Romance Publisher: Wild Rose Press Date of Publication: February 28, 2018 ISBN: 978-1-5092-1938-4 ISBN: 978-1-5092-1937-7 ASIN: B079HLPV9F Number of pages: 426 Word Count: 109,365 Cover Artist: Kristian Norris War, Pirates, Nor The Savage Winds of Time Will Keep Them Apart Ana Salvatore, a marine biologist, wants nothing more than to have an independent life free of her mobster family. While on an excursion in the Bermuda Triangle with her uncle, his boat explodes, and she wakes to find herself in the arms of gorgeous Captain Jacen Stirling on an ancient ship. It's like a fairytale, until he tells her the year is 1814. Jacen is on a secret mission for General Andrew Jackson to infiltrate the infamous privateer Jean Lafitte’s encampment to determine his loyalties. When he discovers Ana while on his way to meet Lafitte, he can’t decide if she’s the worst thing that’s ever happened to him, or the best. As
2 comments
Read more

Secret Heir Dynasty Volume 1 Genre: Urban fantasy, Romance, Fairytales, New adult Note: Adult Content Since the beginning of time, tales have been told about Eden. But all the stories are wrong.  Running parallel alongside Earth, but never touching, there exists not just a garden, but an entire world of vivid colours and breathtaking beauty where the Seraph reside. Jazmine has lived in ten different foster homes, in ten different towns and all her life she has felt like she doesn’t belong – not in the trailer park which happens to be foster home number ten, not anywhere on Earth. After a universe shattering revelation, she discovers why. Far from being the nothing and no one, with no past and no future, that Jazmine had always believed herself to be, she discovers that she is in fact an heir to one of the seven remaining Seraph Dynasties. She is Jazmine Evenstar, the last heir to the sovereign Evenstar Dynasty. Thrust into the world of wealth and privilege in which the i
Post a Comment
Read more

Interview with Laura Bickle, Author of Witch Creek, A Wildlands Novel. In the backcountry of Yellowstone, evil moves below the surface. Excerpt - Giveaway

Witch Creek The Wildlands Series Book Two Laura Bickle Genre: Dark Fantasy Publisher: Harper Voyager Date of Publication: Feb. 27, 2018 ISBN: 978-0062567314 ASIN: B071VBHPW7 Number of pages: 384 Word Count: 88,160 Book Description: In the backcountry of Yellowstone, evil moves below the surface . . . Following Nine of Stars comes the next chapter in Laura Bickle's critically acclaimed Wildlands series. As the daughter of an alchemist, Petra Dee has battled supernatural horrors and experienced astonishing wonders. But there’s no magic on earth that can defeat her recent cancer diagnosis, or help find her missing husband, Gabriel. Still, she would bet all her remaining days that the answer to his disappearance lies in the dark subterranean world beneath the Rutherford Ranch on the outskirts of Temperance, Wyoming. Gabe is being held prisoner by the sheriff and heir to the ranch, Owen Rutherford. Owen is determined to harness the power of the Tree of Life—and he needs Gabe to
Post a Comment
Read more

Enchanter Redeemed Camelot Reborn Book Four Sharon Ashwood Genre: Paranormal Romance Publisher: Harlequin Nocturne Date of Publication: February 1/6 2018 ISBN: 978-1335629487 ASIN: B073P5TL7J Number of pages: 300 Word Count: 80,000 Cover Artist: Brandon Allen Ancient magic and new passion… In the last battle for Camelot, Merlin had to make a terrible choice. Now he must pay the price. When a demon from his past reappears, she wants nothing more than to destroy the wizard. Now to reap her vengeance as a lover scorned, the demon occupies the body of Clary—the apprentice who is capturing his heart—and has the innocent behaving in uncharacteristic ways. Ways that push the forbidden desire Clary and Merlin share into heated play… Book Trailer: https://youtu.be/btP6qzxOmpk Harlequin Amazon BN Kobo iBooks Other Books in the Series Book 1 - Enchanted Warrior (RITA nominee) Book 2 – Enchanted Guardian Book 3 – Royal Enchantme
Post a Comment
Read more 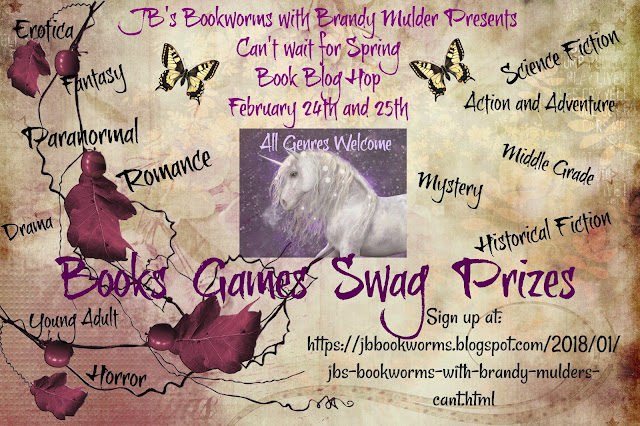 READERS Scroll down, past the prizes to the thumbnails. Click on the thumbnails to visit each site.  Every site has a question for you to answer. Check out the page because the answer will be somewhere on it, then leave the answer in the comments section. You gain one entry for each page you visit, but you have to answer the questions, so we'll know you were there. Facebook and JB's Bookworms with Brandy Mulder are not responsible for the individual Author giveaways. Rule #1 ----- Have fun Prizes 3 winners Lots of swag Many items signed by the Authors First Place Winner Ebook of choice by Christine Gorri (to be downloaded via Bookfunnel) and a signed postcard! Check her out  here. A mobi or e-pub of Eclipsed, and Kissing Frogs, from Kim Ingram Deister. Check her out here. Signed WOTR 2017 event tote with all attending authors’ signatures Castle and Kilts Coloring Book Model Eric Jacob 8x10 signed photo WOTR 2017 aut
Post a Comment
Read more

Love and War: Volume One Charisse Spiers (Shadows in the Dark, #2) Publication date: February 22nd 2018 Genres: Adult, Contemporary, Romance Note from the author: This is a Dark Romance. If you do not like dark themes this book may not be for you. Suitable for audiences 18+ due to content . The f*cking lights. They are all I can remember. Everywhere I turn I see them. They haunt my dreams, and now my reality. She liked the lights. I do remember that. It was part of her life, and in turn a part of mine, until the day I forgot it all. They say your childhood paves the way to adulthood, and maybe it does. I know mine was lit up in flames. I walked the roads of Hell until I figured out that the only way to survive was to exist under a cloak of darkness—to deal with the devil himself. It was the only way to escape the pain, the torment. But the nightmares are still very real. They’ll never leave me alone. The shadows of solitude follow me wherever I go. Weapons—they can be anything
Post a Comment
Read more

Interview with Brantwijn Serrah - Into: Author of Into Nostra: They have opened the door to the apex predator, and now it's hunting them down.

Into Nostra The Pact Book 2 Brantwijn Serrah Genre: Supernatural Adventure Publisher: Champagne Books Date of Publication: January 8th, 2018 ISBN: 978-1-947128-24-8 ASIN: B078W2QLKY Number of pages: 225 Word Count: 84,000 Cover Artist: Brantwijn Serrah They have opened the door to the apex predator, and now it is hunting them down. Deals with the devil always have their price. Problem is, the devil collects with interest. Serenity Walker thought she had the upper hand when it came to her partnership with a demon. D’aej is dangerous, but he was always on her side. Then an old friend lifts the scales from her eyes, and Serenity sees her contract for what it truly is: imprisonment, bloodshed, evil. All done by her own hands. Now Serenity must pay for her ignorance and work harder than ever to fight a demon who can use her body, fool her senses, even twist every thought in her head. Only one sorceress has the power to teach Serenity what she really needs to know…
Post a Comment
Read more
More posts