Since the beginning of time, tales have been told about Eden. But all the stories are wrong.

Running parallel alongside Earth, but never touching, there exists not just a garden, but an entire world of vivid colours and breathtaking beauty where the Seraph reside.

After a universe shattering revelation, she discovers why. Far from being the nothing and no one, with no past and no future, that Jazmine had always believed herself to be, she discovers that she is in fact an heir to one of the seven remaining Seraph Dynasties.

She is Jazmine Evenstar, the last heir to the sovereign Evenstar Dynasty.

Thrust into the world of wealth and privilege in which the impossibly beautiful and equally cruel Dynasty heirs reside, Jazmine is forced to manoeuvre the tangled web that holds the Dynasties together.

Against the backdrop of breathtaking star filled nights, sweeping coastlines, grand marble halls and decadent palaces, Jazmine tries to find her place in this beautiful new world whilst fighting not to lose herself in the process.

But the fairy tale quickly unravels.

Half human and the illegitimate daughter of the late suicide King of Eden, the other Dynasty heirs make it clear that Jazmine does not belong in their world.

Raphael St. Tristan, heir to the rival sovereign St. Tristan Dynasty and next in line to the throne of Eden, the guy with the face of an angel but who is as wicked as the devil himself, promises to break her.

Jazmine quickly learns that the beauty of Eden is nothing but a deception as she uncovers the secrets festering at the heart of it. But can she disentangle herself from the web of deception and intrigue that the Dynasty heirs have spun? Can she stop herself from falling into Raphael St. Tristan’s trap before he can fulfil his promise to shatter her completely? Or are those stories about Eden true after all and will she be foolish enough to taste the forbidden fruit that is Eden itself? 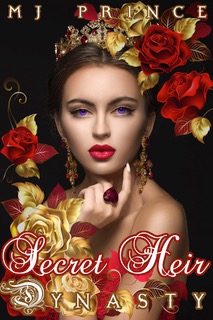 I voluntarily reviewed an Advance Reader Copy of this book

Who can resist a prince, princess, palaces, and alternate worlds?

I don't agree to a lot of reviews, that's Brandy's job, but lately we've both been busy, and she's working on one right now. But anyone who knows me, knows I love fairytales and romance. I wasn't disappointed.

Our Heroine, Jazmine has been raised as an orphan, but finds out that she does have family, in an alternate realm. Of course, she's reluctant to believe, and not really interested, since she's almost an adult, and planning her future, as much as can be expected. She decides she wants no part of it, but her Granfather has other things in mind, and it isn't long before Jazmine finds herself in Eden, facing a realm that doesn't want her. Not willing to take their bullying antics, she rises to the occasion.

Raph is the current heir to the throne, and he wants her out of Eden. He promises to make her life miserable, and does his best to do it. He didn't expect our beautiful Jazmine to be strong, but soon learns she isn't weak, and won't be going anywhere soon. He will do anything to solidify his claim to the throne.

I can't share much more without spoilers, and we don't want those. I will simply say that the story unfolds beautifully. The character voices shine through, and while the characters are similar, being senior high school students, they all have their own unique flair, and bring something to the table.

There are some errors in the manuscript, but I'm reading before the date of release, so M J Prince may still be working on it, but except for those few errors, the manuscript is well written. It is a little bit predictable at times, and while there is tension, there are some slower moments. There is also some sexual content and cursing, if those are things you prefer to avoid. I didn't feel like it was over the top though.

The only question now is ... when can we expect book 2?

MJ Prince is the author of SECRET HEIR – the first book in the all new DYNASTY trilogy. A loose adaption of Romeo and Juliet but with a fantastical twist, this saga of feuding Dynasties, forbidden love, betrayal, royal scandals and power struggles for the crown promises to ensnare, captivate and shatter, then leave readers clawing for more.


New Adult and Young Adult author, sometimes artist, sometimes lawyer, often a dreamer and a hopeless romantic but a die hard bookworm at all times.