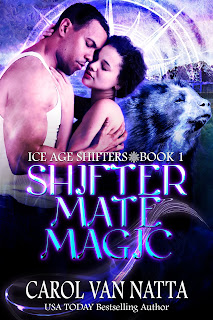 Pregnant and running for her life, a woman must trust a sexy bear shifter to get them both to a magical sanctuary town.

A lonely bear shifter meets his mate. She’s running for her life and doesn’t have time for romance.

Pregnant Jackie Breton just escaped from a corrupt feline pack intent on selling her half-shifter baby to the highest bidder. She’s smart, independent, and has a desperate plan to keep her baby safe: Get away from the pride as fast and far as possible.

Trevor Hammond, prehistoric bear shifter, has been rejected by everyone in his life for… being born, basically. Well, except for the beloved aunt who raised him. He’s built a career as an independent trucker, but life would be much better with someone he can hold in his arms and claim as his own.

When Jackie meets Trevor at a truck stop, his bear demands he help her. His aunt even calls with a dire warning: Get Jackie to the magical sanctuary town in Wyoming before she’s killed.

Jackie thinks he’s sexy as hell, but too good to be true. She doesn’t trust shifters. With the feline pride hot on her trail, however, Trevor and the quirky town of Kotoyeesinay might be her only chance for survival. Even Trevor’s indomitable bear may be no match for the dangerous enemy seeking retribution.

Get eBook One
FREE at 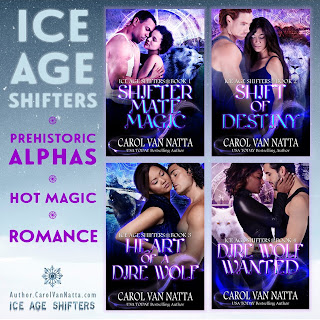 Jackie nodded and walked quickly, following the arrows. Luckily, she didn’t have to wait in line or share the facilities. After the blessed relief of peeing, she used soap and water from the sink to make herself look as presentable as possible under the circumstances. Her light brown skin already made her stand out, because the farther north she’d traveled, the fewer people she’d seen who looked like her. She threw the soiled paper towels in the trash and eyed herself critically in the mirror. At least now she didn’t look like a dangerous fugitive who’d escaped a violent pack of leopard shifters who wanted her back alive or dead. Despite the warmth of the restroom, she shivered.

“Get back to the plan, Jackie,” she told her mirrored self. She couldn’t afford to fall apart, or everything she was afraid of would come to pass. She bent over to drink straight from the sink’s faucet, then wiped the water off her face. She re-centered her her backpack and went out into the convenience store.

The smells of warm bread and sizzling hamburgers drew her like a lodestone toward the restaurant section, but she couldn’t afford to waste the time or the money. She sternly made herself march into the back aisle and open the refrigerator door for the lunch meats and cheeses.

She got a whiff of a tantalizing scent as she pulled her selections off the hooks. Not food, but something intensely interesting. Her sense of hearing and smell had magnified with each passing week of her pregnancy. She wished she knew if that was typical for a human woman carrying a shifter’s child but she had no one to ask. Certainly not the lying son-of-a-bitch leopard who’d gotten her pregnant, despite her precautions. She hoped he was roasting in hell, but he probably wasn’t. Justice for the privileged rich, regardless of skin color or species, had a whole different set of rules.

She let go of the refrigerator door and turned toward the scent, only to run headlong into a man who’d just turned down the aisle.

“Sorry,” she said, even as he said the same word. She regained control of her suddenly clumsy feet. She got the impression of chiseled cheekbones and a square jaw before she dropped her gaze out of habit, one learned from living with volatile shifters. His scent hit her like a freight train a moment later, all woodsy and leathery and mouth-wateringly male.

No one, not even the father of her baby, back when she’d thought she was in love with him and he with her, had ever smelled that good. She took a step back, because if she hadn’t, she’d have been tempted to stick her face in the vee of his short-sleeved T-shirt and lick.

“My fault,” he said. “Are you…” He trailed off and audibly swallowed.

She made the mistake of looking up at him and confirmed that he was the sexiest man she’d ever seen, even counting the handsome actors she’d thrilled over as a teenager. His brown skin and features spoke of an ethnic heritage something like hers, and his warm, coppery-brown eyes threatened to drown her on the spot. His wide shoulders and arms looked strong enough to protect her from anything. The few tight coils of hair on his muscled chest mirrored the close-cropped hair on his head. His low-slung jeans and boots completed the mesmerizing package.

She swallowed and took another step back, away from temptation. “I’m fine.”

Except she wasn’t. She wanted to set fire to all her plans in favor of getting to know the man standing in front of her. For his part, he looked stunned.

She shook herself. Not, not, not happening. She was a pregnant fugitive with enough secrets to write her own soap opera, and an implacable enemy on her tail. A human, no matter how tall, broad-shouldered, and sexy, was no match for a criminal cat-shifter pride with claws and teeth, and vengeance on their minds.

She clutched her meat and cheese packages to her chest and turned away, even though her now throbbing body and aching breasts begged her to get closer. She’d learned to ride out the hormonal roller coaster of being pregnant, so she could damn well ride this out, too.

Carol Van Natta is a USA TODAY bestselling and award-winning science fiction and fantasy author. Series include the Central Galactic Concordance space opera series that starts with Overload Flux and Minder Rising, and the Ice Age Shifters paranormal romance series that starts with Shifter Mate Magic and Shift of Destiny. She shares her Fort Collins, CO home with a resident mad scientist and just the right number of mad cats.

Chat with her on Facebook at https://facebook.com/CarolVanNattaAuthor, or visit her on the web at http://author.carolvannatta.com. Be the first to find out about new releases by signing up for her newsletter at http://bit.ly/CVN-news. 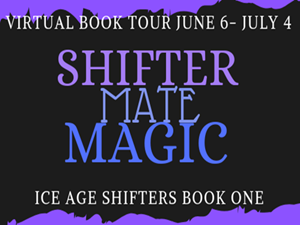