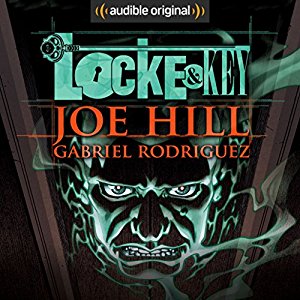 Let's talk audio books for a moment. Some are interesting, some are not. Some have a great story, but a bad narrator. Some are rescued by a great narrator who makes the story way more interesting than it was by itself. This is a great audio book. Since I came across it, it kind of spoiled me a little bit for other audio books. It's that interesting.

First off it has sound effects. Not many do, and this one has a lot. Creaking doors, footsteps, everything is given life. This is a very good thing considering the length of this book. It took me about a week to get through it, and I had a lot of time to listen. Don't let that scare you though because this book is not boring.

Second is the multiple narrators. There is a different narrator for each character which makes it easy to follow who is doing what. This is important because there is a lot going on, and danger around every corner. Stephen King is even a narrator along with some other great actors. If that isn't a hint yes, the story leans towards horror.

Third is the story itself. It's about some kids who move into their uncle's house after their dad is murdered. The house has been in the families possession for years, but their more guards over the house than owners. There are special rooms in the house that are locked because they each have a different affect. There is a flying room, which turns you into a bird, and other seemingly random things. The other trick is the key. It's magic, and can effect things and people just like the rooms. This would be tons of fun except for the evil spirit trapped on the property. The Locke kids were never given an explanation about the house, and this is really really bad.

If you like a some horror mixed with your fantasy I suggest you give this book a try. It will definitely give you a few shivers. You can find it on audible at this link:
audible/Locke&Key