A Quirky Interview with Author K. Caffee Follower of Torments

Author of Followers of Torments 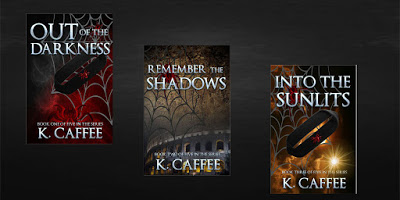 Genre
Fantasy, specifically dark fantasy (some have come to call what I write grimdark)

K. Caffee has always been a storyteller. Now, she is sharing her words with the world, rather than a small group clustered around to hear what she has to say.

When she is not taking anyone on a ride through her wild imagination, she is thinking of something new to tell, trying to keep her cats from claiming the keyboard from her, or studying to pass her next class exam.

An Interview with K. Caffee 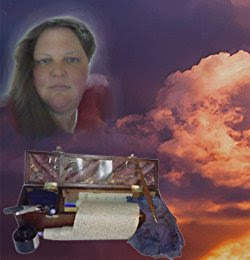 What made you decide you wanted to write?

I didn’t actually want to write, my stories gave me an ultimatum about being written.  Personally, I like sleep and kind of need it, so I gave in after several months of arguing.

My pukah – those mischievous, little, playful helpers.  Anything can be inspiration for a pukah, and I’ve had a few in my life I swear are pukah, not just claiming to be one.

I tend to wander over on the darker side of fantasy.  I keep trying to head over into epic or high fantasy, but I just can’t seem to shake the darker elements from my prose.  I don’t really complain, however, because it lets me poke and prod at some of the darker side of the collective ideology when it comes to things such as mental health, self-identification, and how the wider mass/hive mind tends to seek conformity, even if that means following paths that may not have the best moral compasses.

So far, the only one is Raonal – a wolf-shift pukah.  The little scamp gets into and out of trouble the way most kids seem to play in mud puddles.  I do have a couple more coming up that I’m eager to meet in more depth – Tamefoot and his twin Staephen.  The twins are a pair of horse-shift pukah that have been impatiently kicking at the stall doors I’ve had to erect over their stories so I can finish the series I’m working on right now.  Tamefoot’s a fun guy, and from the little I’ve been able to see of Steve, he’s going to be just as much fun (in a slightly darker way).

A pukah, what else!  Pukah may be little scamps in general, but their heart’s in the right place – they love to help, inspire, and work.  They just make sure to have fun while they are at it.  (I’m just not going to say their “fun” has the same meaning as others.  It’s not everyday you set a lightning faerie on fire for “fun,” now is it?)

If you could disappear in any story, (aside from your own) which would you choose?

To be honest, I’d vanish into just about any fantasy story that would let me have an animal shift.  It wouldn’t matter what the story setting was, because I’d be having too much fun, even if the story was extremely dark.

Your lost in that story right now. Which character are you?

No fair!  There’s too many to pick from!

I’m a voracious reader, and I refuse to pick just one as my personal playground.  I’d love to romp through them all.

I’d stay as a pukah.  Though I’d definitely make sure I learned how to be a polymorph – the lynx would be my primary shift, though a horned Pegasus would be a close second.  Might have to add mermaid in there somewhere too, since I love the water so much.

Fairy or Witch?
Remind me again what a pukah is?  Oh, right!  Faerie half-breed, so no questions there… FAERIE!

Land or air?
Dust on the wind.  If nothing else, it’d inspire folks to keep up their house work.

City or Country?
Definitely country.  City living’s just not for me.  Not enough room to roam.

Red or blue?
Blue – softer on the eyes.

Black or White?
Gray – nothing’s pure after all.

Coffee or Tea?
Tea!  Well, coffee if you’re willing to have a little coffee with your coco.

Music or Television?
Music.  I think I remember what that thin, black panel hanging on the wall’s for.  I’ve just lost the remote.

Paperback or Kindle?
Much as I’d love to say paperback, unfortunately, to satiate the mind-belly, I need the e-reader.  Don’t have room for the dungeon of books I’d have to have.  (Reference books don’t count – those I HAVE to have hard copy.  Only way to flip back and forth conveniently.)

Boat or Plane?
Not just any boat – a nicely equipped sailboat.  Love me that silence.

I’ve always loved horses, and I’ve wanted to develop a new breed of American-bred hunter/jumpers.  It’s an obsession I’ve had for a while, but one I’ve had to chain in the corner of “dreams that won’t happen.”  Between being able to afford it, and other life choices, it’s not going to happen now.

Ummm…. Let me look:
o Keep this in Mind (in development – is book 4 of the Followers of Torments Saga)
o I am You while You are I (book 5 in the Followers of Torments Saga)
o The White Weather Twins series (uncertain how long, though the impression is 8+ books)
o Intus Wars (impression is 3 books for this one)
o Origins (may be a standalone, may develop into a trilogy, not sure yet – it’s a loooooooong way off)
o I’m sure there will be more companion novellas
o Dreamer’s Lane collections (in editing, will be free on my website once I’ve managed to finish them.  Collection of flash fiction, short stories, poems, and a drabble or two – some memoir style, others just fun writing experiments that worked.)

How about an Amazon page?
Amazon

If you want to keep up with what all I’m doing, but don’t want to have a dozen subscriptions, Pukah Works on Alterraden is where everything collects for me.  Besides, I have a couple of things in the works to say “Thank you” for subscribing to the site.

If you don’t want to subscribe, I’m also starting to put together a weekly “newsletter” post which highlights everything I’ve been up to for the week all in one place.  (Maybe call it a digest post?)

If you enjoy helping a new author get word out, and enjoy dark fantasy, I’m also recruiting for my street team – message me on Facebook, and I’ll be more than willing to discuss details with you.

It’s was great having you PukahWorks (aka K. Caffee). Thanks for joining me today.