It should have been an easy job.

As leader of the Posse, a paranormal alliance, shapeshifter Lexa O’Clare thought she’d seen everything over the past millennia. Neither she, nor her vampire partner, Etienne, expected this case to be different.

A fugitive werejackal leads them to a secret lab where supernaturals are unwilling subjects in genetic experimentation. The Posse uncovers a conspiracy implicating high-ranking members of the Inter-species Council.

Can anyone’s motives be trusted?

Lexa: a shapeshifter sheriff who also proxies for humans killed before their destinies are fulfilled.

Yasmin: a dragon who walked among the gods.

Jade: an historian & Fox-familiar to a cranky dragon.

Sentinel: a gargoyle who mourns the fall of Atlantis.

Richard: a witch with a target on his back.

Tris: a rare polyshifter with an eye for a sexy male.

Rhys: four months ago he was human…

I rocked forward on my arms so I could lean closer and hear more clearly. My attic bedroom was directly above the coven leader’s desk, and from this angle, I had a clear line-of-sight to the witches gathered below. It’s surprising how, after all this time, they still hadn’t caught on to the fact I was spying. I could see and hear everything they discussed. Note to self: when creating a sound-dampening spell, it’s not sufficient to muffle the walls, windows, and door—the floor and ceiling should also be considered.

The peephole had been a fortuitous mishap. I’d been practicing my air-moving skills when I accidentally created a small tornado. Hey now, it was a little one, only a couple feet tall—it’s not like I created a whirlwind of epic proportions. Did you know, if you got air spinning fast enough over a single focal point, it’s possible to drill a hole in a wood floor? It was easy enough to make a plug to conceal the damage, and my room’s simple privacy spell was always active, so there were no worries of discovery. Even if they’d looked up—and they never looked up—my magic was flawless enough they’d see an unblemished ceiling. Cocky witches.

Each coven contained a main circle of twelve witches, plus a priestess. The strongest groups consist of extended families who could pick and choose the most promising amongst themselves, but most covens are formed from a collection of individuals with varying degrees of power and skill. Mother Nan’s coven was moderately talented, with a core group of six sycophants, err…I mean, mature practitioners, all of which were crowded around her desk—standing, of course. The seventh witch was Lea, a semi-strong practitioner who still lacked emotional control over her mouth and her magic, but was her mother’s favorite daughter.

“He’s an abomination.” Mara spat the words as if they left a foul residue in her mouth.

“Too true,” Betti agreed, as was her nature.

“It’s a miracle we haven’t been killed in our beds,” Ella said, lips pursed in sour disapproval.

“Oh, definitely, in our beds.” Betti nodded in quick little jerks, like a bobble-head doll.

Coral sniffed. “It was touch-and-go while he went through his let’s-set-everything-on-fire phase.”

Oh, come on now, I’d been sick, running a high fever. I was seven! You’d think, after all this time, they could let it go. 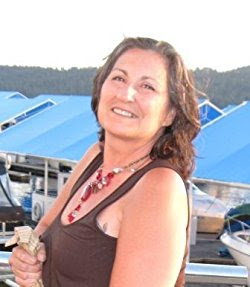 T, a paranormal romance and urban fantasy author, feels writing is not a calling so much as it is a compulsion. No one is more surprised than she is when characters take over the plot and dialog, (re)directing stories in directions she had not (consciously) intended. Although T starts out each novel with a basic outline, she finds one or two chapters into the novels, not only have the characters shredded her outline into tiny unidentifiable pieces, they use the resulting confetti in a nose-thumbing parade.