Interview with Suzanne Johnson, Author of Frenchman Street: Sentinels of New Orleans, the final book in the series. **Excerpt-Giveaway**

THE FINAL BOOK OF THE SENTINELS OF NEW ORLEANS SERIES 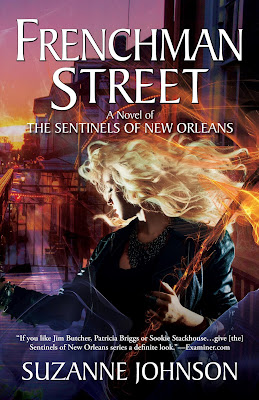 
The uneasy truce between the preternatural species of New Orleans has shattered, with wizards and elves, shifters and vampires—not to mention the historical undead—struggling for ultimate control of the city, including the humans who still think they’re atop the food chain.

They aren’t, however—and the Summer Prince of Faerie wants them to know it.

Stuck in the middle? One unemployed wizard sentinel. For DJ Jaco, war makes for strange bedfellows as she finally embraces her wizard-elven heritage and strikes a deal with the devil so she and her ragtag band of allies can return to defend her hometown. After all, when the undead French pirate Jean Lafitte is the mayor’s newest consultant, things could go horribly wrong.

War is coming to New Orleans in time for Mardi Gras, with the elves and wizards lined up on opposite sides, the shifters with a new leader, the vampires promising loyalty to the highest bidder, and the soul of the Crescent City resting on the outcome of the civil war going on in Faerie between the rival princes of summer and winter.

Mardi Gras Day is approaching fast, and the line between friends and enemies grows thin as DJ tries to stave off open warfare on the St. Charles Avenue parade route.

Laissez les bons temps rouler…but be careful, or the good times might roll too close for comfort.

An Interview with Suzanne Johnson 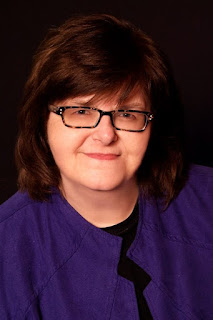 
Tell us about your newest book.
FRENCHMAN STREET is the sixth and final book in the Sentinels of New Orleans urban fantasy series, although I think it stands alone pretty well. It takes place during Mardi Gras, with a brewing war between the wizards, elves, faeries, and vampires—and the undead French pirate Jean Lafitte—spilling over into the streets of New Orleans. There’s plenty of magic, some talking animals, and the answer to the eternal question: What happens if a dragon snacks on too many lab rats?

Writing isn’t easy. What was the most difficult thing you dealt with when writing your newest book? This is the sixth novel (plus a couple of novellas and several stories) I’ve written with these characters and in this world, so the biggest challenge in this book was wrapping up all the storylines that have taken twists and turns along the way so that everyone ended up where I wanted them to be by the end. Although I expect to revisit the world in the future, this is the last book in this particular series, so finishing it the way I wanted was important.

Tell us a little bit about your writing career.
I was a late bloomer, you might say. I’d spent a career as a journalist and magazine editor, mostly in higher education, when I had my own “perfect storm.” My hometown of New Orleans was hit by Hurricane Katrina and, a short time later, I read Jim Butcher’s Harry Dresden series. Using my own Katrina experiences to fuel an urban fantasy story turned into my first novel Royal Street, the first book in this series. It got me an agent and a contract and, since it came out in 2012, I have published 20 books and novellas.

They say Hind-sight is 20/20. If you could give advice to the writer you were the first time you sat down to write, what would it be?
I’d say, “For God’s sake, Suzanne, don’t take a pen name unless you need to hide your identity for some reason!” I sold a paranormal romance series, the Penton Legacy, that was released concurrently with the Sentinels of New Orleans series and wrote it under the name of Susannah Sandlin so my poor (ha) publishers wouldn’t have competing series. Now I’m stuck with the two names, each with books that attract the same readers, and you just can’t put that Humpty-Dumpty back together again once it’s done. I’ve consolidated into a single website, but I know readers still find “Suzanne and Susannah” confusing.

What was your most difficult scene to write? In this particular book, it was the death of a character I’d come to care a lot about. I went back and forth for a long time as to whether or not I was going to kill the character, but in the end it felt right for the story so I did it. I don’t want spoilers, so let’s just say it was a really emotional scene that made me cry when I wrote it.

Are themes a big part of your stories, or not so much? I think themes are always part of any story—the question is whether or not the author puts them in there intentionally. I never want to beat people over the head with a theme, but I have them. My themes tend to be subconscious, but they never vary far from my own True North: value honesty; cherish friendships; keep a sense of humor; be true to yourself; be kind to others.

What are you working on now?
I’m in the early stages of writing a new urban fantasy—maybe a standalone or maybe first in a series, I’m not sure yet. It’s tentatively titled Ice-Kissed and is a different take on shifters set in the small mountain town of Helen, Georgia. I also am beginning to work on the third book in my Wilds of the Bayou suspense series, which is written as Susannah Sandlin.

Is there a release date planned?

Not yet for Ice-Kissed; for the third Bayou book, I hope to have it before the end of the year.

Who is your favorite character from your own stories, and why?
Ah….it depends on what book I’m writing. One? Yikes. I guess I have to say the immortal Jean Lafitte in the Sentinels of New Orleans series because I had to imagine the real Lafitte, who was a smuggler and privateer (i.e.,pirate) in Louisiana In the early 1800s, and what persona he might take in today’s world. The real Jean Lafitte was an incredibly complex man—by turns charismatic and flirtatious, moody and brutal, very intelligent but also very arrogant. I have had fun in this series introducing Jean to things like telephones and cars and milkshakes, while at the same time showing some of the traits from his real life. He thinks nothing of having a duel, but is oddly old-fashioned about sex. And I have done so much research on him—I have an entire Jean Lafitte bookshelf in my office—that I feel I know the man!

Most writers were readers as children. What was your favorite book in grade school? The first book I remember falling in love with and reading over and over was The Secret Garden by Frances Hodgson Burnett, but I practically lived in my small-town library. There was a series of biographies on people like George Washington Carver and Helen Keller. I remember they had blue covers and read them repeatedly as well. I remember reading Gone with the Wind when I was about eight or nine. I had NO idea what it was about. LOL.

What are your plans for future projects?
Other than my 2018 projects mentioned earlier, I’m tooling around with a suspense series idea I’d like “Susannah Sandlin” to tackle next year that might or might not take a paranormal twist—I’m not that far along with it. I’m also writing a “common elements” novella with a group of authors in fall 2019, and…then we’ll see which idea in my ongoing “brain farts” file grows legs and turns into something!

Is there anything you would like to add before we finish?
I hope people won’t be scared off by FRENCHMAN STREET being the final book in the series—I tried to write it in a way that would work as a standalone read. (And I’ll be selling signed full print series sets on my website at way below cost!)

That sounds like a great offer. Good luck with your newest release, and thank you for being with us today. 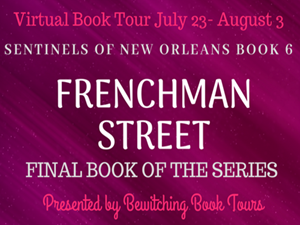 
On Aug. 28, 2005, Suzanne Johnson loaded two dogs, a cat, a friend, and her mom into a car and fled New Orleans in the hours before Hurricane Katrina made landfall.

Four years later, she began weaving her experiences and love for her city into the Sentinels of New Orleans urban fantasy series, beginning with Royal Street (2012), of which Frenchman Street is the sixth and final book in the story arc. She also has written Pirateship Down and The Consort, both set in the Sentinels world, and the standalone Christmas in Dogtown.

She grew up in rural Alabama, halfway between the Bear Bryant Museum and Elvis’ birthplace, and lived in New Orleans for fifteen years, which means she has a highly refined sense of the absurd and an ingrained love of SEC football and fried gator on a stick.

She can be found online at her website or her blog.

Suzanne currently lives in Auburn, Alabama, where she works as a full-time author and copyeditor. 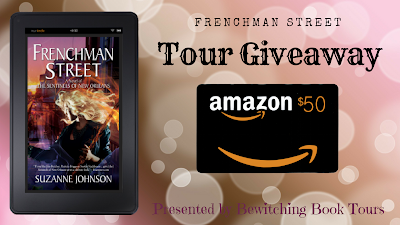