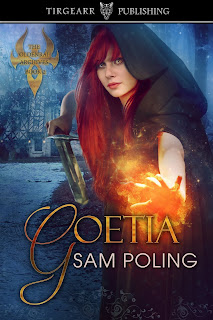 After imposing a controversial quarantine, Adelstadt Mayoress Mirabel Fairfax finds herself in the crosshairs with vengeful highwaymen. When they target her family and the vital shipments her village desperately needs, she turns to witchcraft to restore order herself. But something is wrong: her magic becomes unreliable, and monstrous images torment her mind's eye.

When gruesome murders terrorize Adelstadt, she suspects the highwaymen have turned to the occult, allying with a demonic entity. A Goetia. The hallucinations become all-too-real, and Mirabel must rely on her cunning, wrath, and what few friends she has left if she hopes to rescue her valley, her beloved, and her mind.

Felix Fairfax does the best he can as the husband of a controversial mayoress witch, but his life is once again turned into a fight for survival when he’s kidnapped by the highwaymen. They force him to help investigate his wife’s hidden lair, where they become trapped with creatures of unspeakable horror. Whatever Mirabel had locked away hunts indiscriminately—it hunts him—and if it gets out, plagues and highwaymen won’t be Adelstadt’s problems any longer.


Mirabel’s boots clicked down a stone, spiral stairway, blowing past the half-melted candles lining the steps. The candles provided the only light, at times leaving her to fumble for footing on the disrepair of the steps. The descent into darkness went on longer than she’d ever recalled experiencing before. What a time for metaphysical nonsense. An echo of raspy, hollow screams chased her, reverberating within the stairwell, challenging her to keep up speed.

She stumbled off the final steps, at last on the ground floor, and clawed her wild, deep red hair from her face. Archaic, religious candle racks illuminated the chamber. Nothing had changed down here. At least, not yet.

She sped past rows of dilapidated tables and pews, reached a laboratory-style workbench, and threw her arms against a stack of journals, scattering the research. Upon snaring a specific handful of pages, she sprinted for the tower entrance.

A bony tusk punched through a nearby wall, knocking candles from their altar. They struck silver offering plates on the floor, crashing like cymbals. Mirabel leaped back, one hand clutching her research against her body, the other gripping the handle of her rapier.

Black, viscous slime poured from the hole around the horn, crept over the altar, and dripped onto the floor. Small, misshapen hands sprouted from the goop like blooming black-fingered flowers, grasping at the stone tiles. A reek like sweet, rotting fruit flooded the air.

She closed her gaping mouth, turned away, and continued running down the hall. Her burned-orange cape fluttered and whipped, a nuisance, rescinding its value.

The entire tower quaked, followed by more disembodied shrieking. A spiny, gray tentacle as thick as a branch smashed through the wall ahead in a deafening boom, lashing and twisting like an eel out of water. She drew her rapier and severed the tip with the sharpened, distal edge of her weapon. The piece of otherworldly flesh fell away, but several more tentacles punched through imperfections in the surrounding walls, blocking her path. Each unique arm contorted at varied rates, some more aggressive than others.

Still holding her sword, she extended her arm and channeled magic through it with a rush of heat. Upon releasing her focus, the heat fled her body and flames burst in front of her, engulfing the tentacles and transforming them into crackling ash.

Vertigo crashed over her in waves as penalty for her sudden, great expenditure of soul energy. With inhuman moans drifting on the air, she shook off her fatigue and proceeded to the iron double doors ahead, ramming her shoulder against them. They opened a crack, blasting her face with freezing air from outside.

She pushed against the door, and it ground open, scraping through a layer of fresh snow. She slipped her thin frame through, dropped her research and rapier, and shoved the door closed.

She spun and straightened her posture. “Under no circumstances is anyone to approach the tower.”

Two guardsmen clad in vermillion red, double-breasted uniforms stood at the base of the tower steps, shoulders dusted with snow. They possessed several weapons: muskets with bayonets, sabers, and crossbow pistols. All useless.

“Aye,” said the leading guard. “We thought we heard some rumbling from our post. Another quake?”

She knelt, sheathing her rapier and collecting her papers. And then she saw the ooze. Not much, but strands of it slithered under the door. She backed away and marched down the steps.

She stopped between the guards and faced the shift lead. “Evacuate. It’s a simple concept. Do it now.”

“Yes, the entire hamlet. Get everyone to Adelstadt at once.” She looked past him at dozens of wood-framed homes at the base of the tower’s hill, billowing smoke from their chimneys. “No one goes near the tower. Get everyone out now.”

The other guard spoke. “But why? Minor quakes happen all the time. My family lives here.”

The three marched down the hill. Mirabel said nothing.

“Miasma. I’ve discovered the tower is the source of plague-infested miasma. Likely the cause of other outbreaks around Adelstadt. Deadly strains. None can reside here any longer. I’m sorry.”

“Tordin’s mercy,” said the guard. “I’ll have my family pack right away.”

“Nay. Full evacuation. Immediately. Have the citizens take only what they can carry on their way out.”

“I am the Mayoress and a syndicate-certified disease specialist. You think I give this order lightly?”

“Of course not, Mayoress Fairfax,” said the lead guard. “We’ll get everyone out within the hour.”

“Faster if you are able. Much faster.”


Sam Poling has been writing fantasy and science fiction for the thrill of it his entire life, from short stories to screenplays. His love for each of the subgenres led to dedication to writing genre-skirting fiction with all the elements that make up the human condition. He holds a strong enthusiasm for medical studies and currently works as a medical assistant in a large clinic while taking classing for nursing. He also serves on a health and safety committee, including disaster preparedness and infection control. His interest in epidemiology and medical science tends to spill over into his writing endeavors. 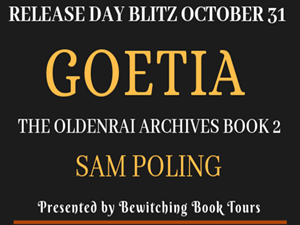