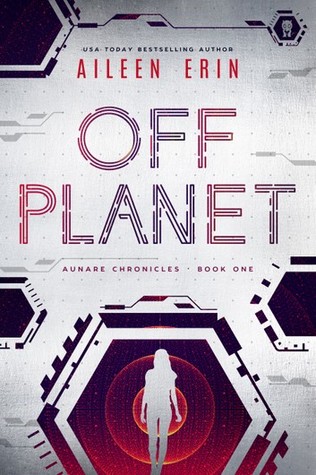 Maite Martinez has always yearned for more than waitressing in a greasy diner on the polluted ruins of planet Earth. Hiding her special abilities is a full-time job on its own, even with the government distracted by the mysterious alien race – the Aunare.

When a SpaceTech officer gets handsy with her, she reacts without thinking. Breaking his nose might not have been her smartest move. Now she’s faced with a choice: serious jail time working in a chain gang on a volcano planet or join the corporate army to fight against the impending war with the Aunare. It’s really no choice at all.

As with everything in her life, Maite quickly realizes that the war with the Aurnare isn’t what it seems. And Lorne, the Aunare prince, keeps popping up everywhere she goes. Being seen with him could get her in even deeper trouble with her commanders, but he’s the first person who sees through the wall she’s built around herself and she can’t bring herself to send him away.

When the situation between SpaceTech and the Aunare escalates, Maite has a way to end the war before it even begins. There’s only one question: Can she stop the total annihilation of humanity without getting herself killed in the process?

Interview with the Author

Hi! My name is Aileen, and I’m a shy-introvert, chocolate lover, and a reformed Diet Coke-addict. I’ve transferred my caffeine addiction to cold brew, but I still dream about a morning DC… Sigh. I love to read books, travel, and spend as much time as possible with my family, especially at Disneyland. I’m very lucky that my passion—writing—is also my full-time job. I love writing, and when I’m not writing, I’m usually thinking about writing. The more I do it, the more I love it. And I’m so thankful that my readers have found and love my books.

Off Planet is a book that I started while finishing my MFA at Seton Hill University, with Maria V Snyder as my mentor. It starts out in a futuristic version of Albuquerque, NM, where where corporate conglomerates have left the world's governments in shambles, and anyone with means has left the polluted Earth for the promise of a better life on a SpaceTech-owned colony among the stars. It follows a girl named Maité, a halfer (half-Earther, half-Aunare aka an alien race). Relations between the Aunare and Earthers dissolved years ago and halfters are executed when found. She’s taken the art of blending in and staying hidden to a whole new level, but all of that is about to end…

It releases 3/19, but it’s available for pre-order now.

I recently went through my parent’s storage unit and found stories from when I was in first grade. So, I guess I could say that I’ve always been writing, but I took a big break from it twice in my life. I stopped in high school and consumed books at an alarming rate. Towards the end of college, I started writing again, but I never thought of it as an achievable career. So, instead of following my dream, I ended up getting a degree in Radio-TV-Film with a concentration in post-production. I moved to Los Angeles after college and got a job at a commercial post-production house. After 1.5 years, working at that job, I realized I was miserable, and started writing when I got off of work. Just a couple hours/day M-F. It was something I did just for me, for my sanity and mental health. After a year, I had my first novel completed. I gave it to my then-boyfriend (now-husband), and he said it was pretty good, but needed work. Then, I did something probably a little crazy. I quit my day job. I got a part-time nannying gig and spent the rest of my time fully committed to writing. I eventually went on to get my MFA, and shortly after receiving that, I published my first book, Becoming Alpha.

It was 2007 when I started writing after hours. 2008 when I quit my day job. So, I guess 12 years when I picked it up for good as an adult, and 11 years since I fully committed to finding a way to make writing my full-time focus. But my love of stories has been a constant in my life from the beginning.

What inspires your stories?
Everything! From current events to places I visit. I love to dream about all the what-ifs, which is why speculative fiction is a genre that I’ve stuck to, although I do have a contemporary romance idea bouncing around in my head, too.

2008, but I have to say that it took a long time for me to feel comfortable calling myself a writer. Even after I got my MFA, I had to make myself say that I was a writer. Not that I was ashamed or anything like that, but I felt like it was just something I did and enjoyed. I didn’t really believe in myself. I didn’t feel like a “real” writer. It’s something that I hear from a lot of my fellow writers and authors, and for each of us, it takes a little bit of time to have enough confidence to claim the title. I think sometime after a published my second or third book, I realized that I wasn’t only a writer, but a published author, too.

When I’m reading, I look for things that I enjoy or hate in the writing. I get more use out of a book that I’m not enjoying than I do out of one that I love. I can easily spot what I’m not liking about it, and I make note of it so that I can avoid doing whatever that is in my own writing.

When I get really sucked into a book, then it’s harder for me to really tell what it is that the author’s doing to suck me in. I tend to get lost in the story. These days, that’s harder and harder for me. I notice technique and strategies and tropes an author is using pretty quickly. But still, every once in a while, there will be a book that really sweeps me away that all of those writerly tools become transparent and all I can see is the story and the characters. Those are the books I’ll read again and again. I study them to see why I got lost and how the author managed to do it. I study them until I start to notice the techniques, and then I make note of those as something to try in my own writing.

Only that I hope you read and enjoy Off Planet. It really is a labor of love, and I hope Maité sucks you into her world for a while.

Absolutely. Thank you for being with us today. Good luck with Off Planet.


Aileen Erin is half-Irish, half-Mexican, and 100% nerd–from Star Wars (prequels don’t count) to Star Trek (TNG FTW), she reads Quenya and some Sindarin, and has a severe fascination with the supernatural. Aileen has a BS in Radio-TV-Film from the University of Texas at Austin, and an MFA in Writing Popular Fiction from Seton Hill University. She lives with her husband in Los Angeles, and spends her days doing her favorite things: reading books, creating worlds, and kicking ass.