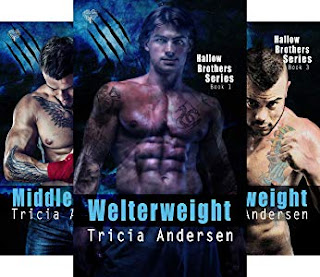 This series is about seven brothers who love MMA fighting and are werewolves. The mating bond joins them with their mate after they sleep together, and forever afterwards if someone who interested in them touches them it makes them physically ill which leads to some tricky situations. Also, these werewolves are not nice and cuddly. During the full moon you better not be around, and Caleb may be the most dangerous one. Book one introduces us to Caleb and Meg, and these two have sparks flying and starting fires from the beginning. They fight hard and love hard, and it's a good thing because Meg's ex is out for revenge. You see Caleb is fighting Meg's ex for a chance at the welterweight champion. Meg's ex is a hot mess and dangerous. These two go through hell to be together. There is lots of explicit content, and there is violence. There is a little bit that may be a slight trigger for some.

Book two introduces us to Micah and Eve. Micah goes through so much with Eve in this book. My heart hurt for these two. I suggest that you read book one first as this one picks up right after the first book. Micah doesn't fight in the cage because he suffers from black outs and migraines, but he's willing to fight to save Eve's life. Eve owes a bad man lots of money. Eve doesn't believe that she is worth saving, and is on a self destructive path that could ruin everything. A couple of unknown werewolves have shown up in town from the pack Micah's dad escaped from, and want the brothers to go back with them. The danger level is rising as the brothers try to protect the ones they love.

Book three introduces us to Sam and his two mates. Yes, two. Poor Sam, he is so in love with Henry, but is afraid his family won't accept their relationship. Sam goes to visit his boyfriend, and finds Delilah instead. This leads to all kinds of problems in all their personal and professional lives. Unfortunately, trouble from book two draws the attention of some vampires and now they're in town causing all kinds of trouble. Sam, Dee, and Henry share each other equally, so there is M/M and M/F, and M/F/M moments going on here. There is explicit adult content with all three situations. There is also a scary secret hiding in Henry's family tree that could destroy the world as they know it. By this book I was feeling so bad for the Hallow's mamma. She goes through so much, and is still bound by her mating bond to their father even though he has passed away. I feel so bad for this lady!

Book four is about Josiah and his mate Sarah. Poor Josiah gets mated to straight laced Sarah. Sarah is a school teacher at a catholic school, goes to church, prayed with his aunts, and can't stand cursing. Josiah is a foul mouthed werewolf that has taken care of his family since his dad died, and coaches his brothers. Sarah doesn't understand the danger she is in, and refuses to move in with any man until they're married. She also keeps a big secret from Josiah with dangerous consequences. With dangerous werewolves and vampires closing in, Josiah is forced to do whatever it takes to protect those he loves.

Book five brings the series up to the boiling point. Abe is trying to be his own man even when his brothers just see him as a kid. He starts wrestling behind their backs when they refuse to allow him to fight in the MMA cage. He hides what he is doing even though everyone is in serious danger. Kai is a mermaid on a mission that gets seriously derailed when she sleeps with Abe. This brings out the truth that there are other mystical creatures on the move and wanting to get their hands on mamma's amulet. Trouble is can they even trust Kai? Her king is up to something, and it may kill them all.

As there are seven brothers I would expect two more books. Hopefully they come soon as I am now hooked and want to know how the story ends! The mating bond for these werewolves is intense and overpowering. While they have no control over their need to be with their mates, this series balances out the intense physical scenes with an equally intense plot. I can't stress enough that these books really should be read in order as the characters show up in following books after they are introduced and they are not just side notes. The main thread of the plot about the brother's true heritage, and the truth about their mother's amulet is a central part of every book. The individual books shows what each brother brings to the whole, and shows how the entire family has to learn to work together as they gain more members.

Each book contains very explicit content, and there is violence. The books are in Kindle Unlimited and can be found here: www.hallowbrothers.amazon.com