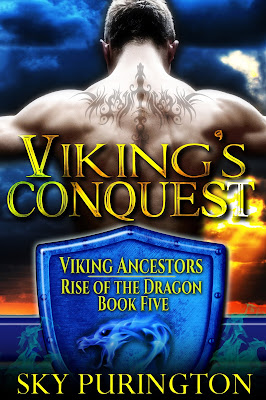 Rise of the Dragon

An alpha Viking dragon shifter and his fated mate face their demons in a scorching medieval romance about second chances.

Tormented by her past, Tess hits the open road, and never looks back until she’s forced through time to medieval Scandinavia. Caught in an unraveling prophecy, the only way she can defeat the enemy is to take a mate. But first, she must work through heart-wrenching memories. What she doesn't expect is navigating her rocky history alongside a man as broken as her. A Viking who offers not just solace but sparks untouchable desire.

Though determined to end his rival without becoming mated, Viking Rokar Sigdir begins thinking differently when Tess joins him on his quest and awakens feelings he thought long dormant. Yet with passion and a chance to start anew come dark flashbacks of losing his kin and the unimaginable pain it caused. A misery he fears repeating.

Will Rokar and Tess be able to let their pasts go and work together to end their nemesis so they can share a future? Or are some things just too hard to overcome? Find out as they journey through time and turbulent memories on a fast-paced, otherworldly adventure that becomes not just a conquest of their enemy but of their grief-stricken souls.

“How did you and Helga meet, anyway?” Tess began walking again. “Or did you grow up together?”

He seemed relieved to speak of lighter things as he joined her. “I met Helga when visiting an allied tribe.” The corner of his mouth inched up. “She was dancing the first time I saw her.”

“I did after I met her.” His crooked grin grew a little. “I was very clumsy, but she didn’t seem to mind.”

“Clumsy?” She chuckled. “But you’re a dragon! We’re the epitome of grace.”

“In dragon form,” he agreed. “But I was not so graceful in human form.”

She arched her brows and eyed him. “So you dance well now?”

She chuckled again, detecting a bit of humor lurking beneath all his baggage. “So you saw Helga dancing. Then what?”

“I waited until she was done dancing then approached her.” His gaze went to the trees swaying in the wind. “She continually tucked a lock of hair behind her ear, but the wind kept blowing it across her face as she smiled at me for the first time.” He absently rubbed his fingers together as though he remembered what her hair felt like. “Eventually, I tucked it back for her.”

“Funny the things we remember,” Tess murmured, rubbing her fingers together as well. “I recall the feel of Axle’s leather jacket, the scent of cigar smoke clinging to it. That was my first thought when we finally started chatting. He smoked cigars, and I smoked cigarettes back then…bad combo…mostly cuz I hate the smell of cigars.” She shook her head and spoke without thinking. “I should’ve known then we were a match made in Hell.”

“I don’t smoke anything,” he divulged, wonderfully frank. “But I enjoy drinking.”

“Me too,” she echoed then relented. “Though I might’ve leaned on it a little too heavily lately.” She shrugged a shoulder, not about to apologize. “Or not. Who knows.”

“We all cope with things how we will.” He sounded unapologetic. “I have barely spoken to my kin over the past two years and as you know, shut them out entirely telepathically…until recently.”

“So it seems,” he conceded. “Yours was the first voice I’ve heard in my head in a long time. Once that happened, it seemed natural to allow my kin back in.”

“Well, I’m glad to hear that,” she said. “And for what it’s worth, I’m sorry I busted into your mind without permission.” She met his eyes, guilty though she had no choice. “I had no control over it.”

“You mean your dragon took over?”

He nodded and looked at her with hesitation, clearly wondering if he should say what he was thinking.

“What is it, Rokar?” she asked. When he started to shake his head, she urged him on. “You’re the one who said we needed to start somewhere so don’t hold back.”

He hesitated another moment before he relented. “I did not mind.”

“Didn’t mind what?” she prompted when he didn’t go on.

Struggling, he finally said, “You…”

She almost grinned. Was he being bashful? “Me?”

“Yes, you,” he stated bluntly.

She couldn’t help another chuckle as she tried to draw him out. “Me, what, Rokar?”

“You.” He sighed and looked at her like she should know what he was talking about. “I was glad you entered my mind without permission.”

He went to say more but snapped his mouth shut, evidently finished sharing. At least in this regard.

“I’m glad too,” she revealed and meant it. “I like the feel of you within my mind.”

The minute she said it she regretted it mostly because it sounded like she was undermining Helga and she hadn’t meant to do that.

His question caught her off guard. “Of course.”

Had Helga rattled his confidence that badly? While typically she’d find that unattractive in a man, preferring a tough-as-nails sort, she knew deep down Rokar was plenty tough. He was just wounded and vulnerable in a way she understood. So she stopped and told him something a woman should have told him long before her. She gave it to him straight.

In fact, her dragon gave it to him even straighter.

“You sound amazing in a woman’s mind, Rokar,” she said. “Your inner voice is wanna-spread-my-thighs-for-you sexy, and your essence is wrap-around-the soul warm fuzzies, all ‘the feels,’ protective. Not to mention—”

That’s all she got out before he proved he did, in fact, possess a good deal of confidence.

He yanked her close and kissed her hard.

Purington loves to hear from readers and can be contacted at Sky@SkyPurington. Interested in keeping up with Sky’s latest news and releases? Either visit Sky’s website, www.SkyPurington.com, subscribe to her quarterly newsletter or sign up for personalized text message alerts. Simply text 'skypurington' (no quotes, one word, all lowercase) to 74121 or visit Sky’s Sign-up Page. Texts will ONLY be sent when there is a new book release. Readers can easily opt out at any time. 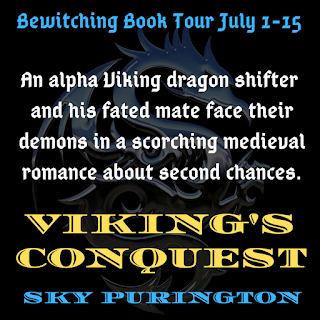