Capital Thirst by R.W. Buxton - When predator and prey become one, no one is safe. 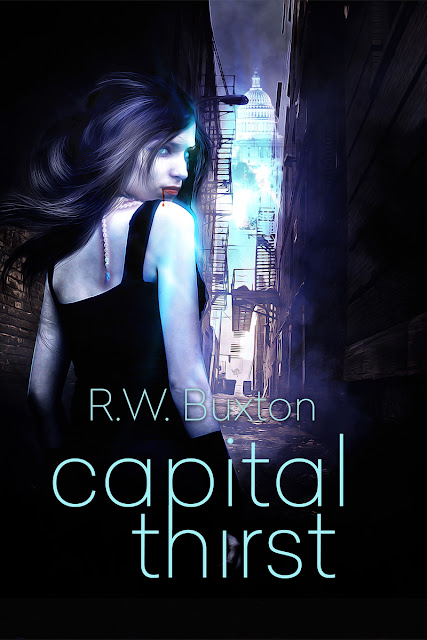 DC bustles, the light from the city fills the night. But in the dark alleys and backstreets, only slivers of light from a full moon dance. In such an alley, a shadowy figure is hunched over a body. She lifts her head to reveal soulless eyes and fangs dripping with blood as she licks her lips with exultation.

Standing up, she wipes her chin, and tosses her long black hair, then saunters away.

At FBI headquarters, Gerry examines the case files of 18 wealthy men, dead, with few clues, no DNA, and no leads...

When predator and prey become one, no one is safe.

Where Do Your Ideas Come From?

The easy part of the question is the ideas for the books come from my characters. Once I have an idea for a character, I think about what he or she is like and then think about what they would do in different situations. I try them in a short story and if I like them write something longer. I let my characters create their own stories in a sense. Everything just flows from who they are, what they want, their dreams, and desires.

But the hard part of the question, and I suppose what you are really asking is how do I get my ideas for the characters? I can honestly say I’ve never based a character on a real person or anyone I’ve met. They are all figments of my imagination. Something I’ve created from the little electoral impulses in my brain.

Usually I start with an idea. Take Erin Kingsly. I was thinking about vampire novels and all the vampires are hunky, dark, brooding, males. I started to wonder what a rogue female vampire would be like. Of course, she had to be sexy, aren’t all vampires after all? But how would she act? So I wrote a short story about her. I actually liked it and wrote several more short stories not specifically about her but female vampires and an idea started taking shape.

After that I decided I liked this character, but she was kind of one dimensional, sexy, haunted and dangerous. That’s when I started to work on developing a backstory that would support her actions and define her hopes and dreams. It’s a very evolutionary process. The ideas don’t just pop into my head fully formed.

Just like the Erin Kingsly novels flowed from Erin, while I was working on the plot and outline of what will either be the fourth or fifth book in the series, I created a new character that was just supposed to be one of the supporting bad guys. A fiery, red headed wolf shifter. As I played around with the story line she became more and more defined and a bigger part of the story.

Now, although I didn’t plan it this way, I’m thinking of a spin-off series based on her. She has a story to tell. It’s one of becoming free and breaking the bonds of a male dominated world.

This isn’t a fast process. Sometimes these characters lurk in the back of my mind for months or even years before I can figure out what to do with them. Other times they just happen like the red headed shifter. She still doesn’t have a name, but I know she’ll be a force to be reckoned with.

Another example of a character driving me to create is a witch that I want to write about. She’s young, spunky and on the cusp of her 21st birthday when she finds out about her family secret, she’s a witch. She never really had a family because she spent her young life in foster care bouncing from one family to another. But when she turns 21 she finds out she has a whole family she didn’t know about and they are all witches and want to see her gone.

The idea for her came to me after I finished the first drafts of the first three Erin Kingsly novels. I was just thinking about what to write next and I thought what about a witch. I sat there at the computer and started putting down some ideas. Just bits and pieces and over a week or so the idea was born.

None of these ideas ever come fully formed. I get an image or just a whisper of something and then play with it, look at it from different angles until I have a character. From there it’s a matter of defining their life and seeing where they will take me. 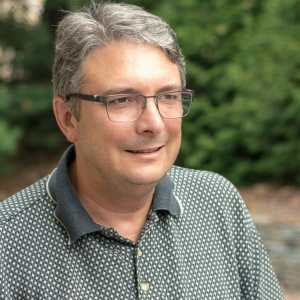 I love a good paranormal read, something about the un-dead haunts the fringes of my mind. Mix in romance, love, loss, and you have a great story.

I voraciously read everything, fiction, and non-fiction but always find myself turning back to the darker stories. I’ve always wanted to write and the dream became a reality with Capital Thirst, and the remainder of the Erin Kingsly novels.

I spend most of my days designing and building websites, but my free time is devoted to my wife, family, and cats. Yes three grown children and three cats. Things can be hectic.

For fun you might find me driving winding roads with the top down or out photographing nature.

GIVEAWAY
R.W. Buxton will be awarding a $20 Amazon or B/N GC to a randomly drawn winner via rafflecopter during the tour.
a Rafflecopter giveaway