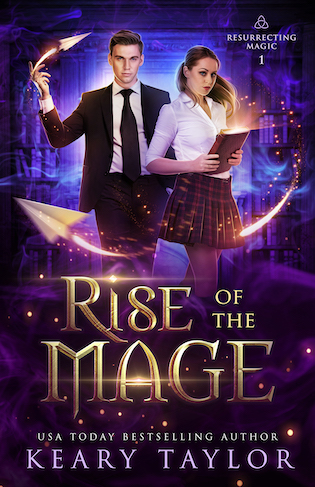 Rise of the Mage
by Keary Taylor
(Resurrecting Magic, #1)

College is hard—classes, homework, bullies. But, being the daughter of renowned professors, I grew up at Alderidge University and was on track to have an easy start to my freshman year. Until I met Nathaniel Nightingale.

Aloof and mysterious, Nathaniel’s hands were covered in scars that told me he had a violent history. He started asking questions about my own, and then dark secrets in our family lines collided after a strange discovery in the library. We found words with power, and they unleashed abilities in the both of us that had been lost to the world.

Turns out, the witch trials weren’t entirely the product of mass hysteria. As far as we can tell, almost every mage was wiped out – killed for their knowledge and their capabilities. And now I have to wonder if my mother’s disappearance is related.

This is dangerous. It’s feels impossible. We have the weight of an entire lost race resting on our shoulders.

“Did you know that while the Salem witch trials were the last and only here in America, that there is still official litigation against witchcraft in parts of the Middle East?” With those long fingers of his, Nathaniel opened the book and flipped a few pages. He opened to a section and handed me the book, pointing to a particular passage. My eyes scanned it, searching for what he wanted me to see.

It was a list of the names of the men and women who were killed at the Salem Witch trials. And there, almost to the bottom, was the name of Mare McGregor.

My blood chilled, seeing her name there, listed among the accused and executed. I knew her name. I knew her story, as much of it as had been recorded by her son, my great-something-grandfather, Collin. But it was always so stark, the reality that she’d been hung. Killed.

“The entire world has a history of witch hunts,” Nathaniel said, turning to the bookshelf again. He grabbed another book, opening it to a section. “Egypt and Babylonia.”

He took another book, opening it and laying it on his desk. “Across the Holy Roman Empire.”

My heart rate picked up. Sweat broke out on my palms.

Still, Nathaniel grabbed another book and another. “Russia, India, and even Africa to this day.”

I watched Nathaniel, who stood with his back to me. His shoulders were tight. His head was bent low. His words were growing lower with each one spoken.

Gingerly, almost reverently, he reached for another book. The red binding was worn, and there were no words left. Gently, he grabbed it, and he held it to his chest, his arms carefully wrapped around it.

“It is estimated at around 60,000 people were killed for being witches over the course of three hundred years, in western Europe and central Europe alone. Tens of thousands more in Asia, countless more in Africa. Miraculously, only nineteen here in America.”

There was a deep sound rushing in my ears and it took me a moment to realize it was the sound of my own blood. There was a heavy feeling of anticipation and uncertainty in my gut.

Nathaniel turned back toward me, and in his eyes, I saw something big.

“I cannot confirm that I am a direct descendant, but there was a William Nightingale killed during the Lancashire witch trials in England in 1612.” His eyes were fixed on me, but I could tell, he wasn’t seeing me. He had fallen into history, into ancestry. “There are thousands of stories of accusations and trials and deaths.”

“Yes,” I said, wanting to bring us back to a place that wasn’t so dark. I wanted everything to go back to being light. “And they were the result of mass hysteria and superstition. They wanted something to blame for bad harvests and hard financial times. A lot of innocent people died.”

Nathaniel’s focus returned to me. Three seconds passed, and finally he gave a little nod, but it didn’t seem like a complete act of agreement.

He stepped forward, and gingerly, he laid the book in his arms on the desk. I recognized it then as the one from the library, the first day we had met.

“You said you cannot read Gaelic,” he said in a low voice. He opened the book and looked down at it, gazing at the words with wonder. “But maybe you should try again.”

“Nathaniel, I-” I began to protest. But he looked up at me and begged me with his eyes.

So, I crossed to the desk to stand beside him. I looked down at the words, remembering the silly experience with it before, now weeks ago. I could recognize letters, as I’d concluded before, some of them were of Latin origin. But I couldn’t read any of it.

“I haven’t learned Gaelic in the last few weeks, Nathaniel,” I said, looking over at him. He looked at my face intently, as if he were waiting for something spectacular to happen. “I still can’t read it.”

Gently, he reached for my hand, wrapping his fingers around my wrist. I didn’t know what he was doing, but I decided I trusted him enough to humor him.

He brought my hand forward, and gently, he set my fingertips down on the edge of the pages.

It was as if I’d blinked, and it turned into a different book.

One moment it was in unreadable Gaelic. The next, it was in perfect English.

I blinked, leaning in closer to the book.

A simple matter of will and asking, levitation is one of the simplest forms of magic.

My eyes read the line without a second of hesitation or translation.

I ripped my hand back from the book and took half a step back.

Instantly, the book was once more in a language I could not read.

The room was utterly silent. So quiet it pushed in on my ears and the only sound was my own heartbeat.

I felt Nathaniel’s eyes on me. I felt meaning filling the air. I felt anticipation. But also, momentous confusion.

Cautiously, I reached my hand forward again. Filled with fear and wonder, I touched the edge of the pages.

In levitation, most users have certain affinities, whether they be metal, earth, wood, life forms, etc.

Because it was the scientific method of proving a hypothesis, I removed my hand one last time and the words became unreadable.

I touched the pages, and my eyes relaxed as the words became readable.

I looked up at Nathaniel and startled when he stood there with his right hand held up, his fingers generally pointed at the ceiling. And floating around his fingertips there were three paper airplanes, swirling, dipping and rising through the air. And that air around his hand had this…shimmer. Almost as if glitter floated in the air. But I couldn’t quite focus on it. And the air seemed more…golden.

“What kind of trick is this, Nathaniel?” I asked, my words hoarse and quiet.

I’d never seen this look in his eyes. They were filled with…excitement. And hope. He shook his head. “It’s not a trick, Margot,” he said. He waved his fingers, and the airplanes set off toward the opposite end of the solarium. Gently, they floated toward his bed, flying in a circle over it. They followed each other in a line, doing a flip in the air and then flying over to the couch, where they dipped down low, soaring beneath it, before they aimed back at Nathaniel. There, they swirled around his fingers once again before they gently floated down to the table and landed on the book. “It’s in my blood. And I believe it’s in yours, too.”

Keary Taylor is the USA TODAY bestselling author of over twenty novels. She grew up along the foothills of the Rocky Mountains where she started creating imaginary worlds and daring characters who always fell in love. She now splits her time between a tiny island in the Pacific Northwest and Utah, with her husband and their two children. She continues to have an overactive imagination that frequently keeps her up at night.