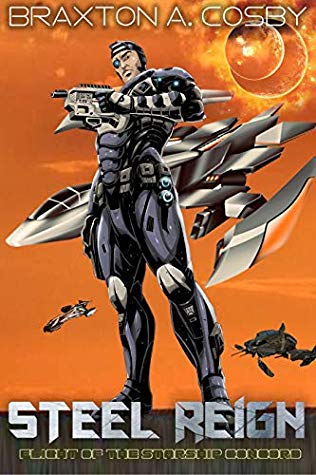 After surviving an all-out implosion of catastrophic proportions following the failed fusion of twin stars Mira A and B in a class B Supernova, the people of galaxy Proxima Centauri have pressed forward with dreams and hopes of finally living in peace. But for Bounty Hunter Steel Reign, the clock of destiny is speeding ahead at a steadfast pace as he desires to hunt down a group of rogue super-soldiers before they can plot against King William Derry and his kingdom on planet Fabricius.

Consistent work as a Hunter in Proxima Centauri has always been a feast or famine occupation, and when the flow of credits slow to a snail's pace, Reign must find a secondary means of funding to finance his seek and destroy assignment by way of scalping a precious artifact on the open Black Market. That is, until his supplier comes up short, forcing him to pump the brakes and fall back to Plan B: finding his long lost sister Olia who was captured by the space pirate Forge, and forced to compete in a deadly game of chance aboard the Eclipse. And if that wasn't bad enough, the stakes have just been raised when he discovers that she is the only source of an antibody that can offer a cure for the deadly, venomous DX virus lurking in his blood, just waiting to consume him.

To survive, Reign will have to test not only his skills as a legendary assassin, but also his patience, as he takes on a rogue band of misfits to steal and crew the prototype starship Concord to thwart Forge's plans once and for all.

Escaping that day was the easiest part of the gig, as I accessed the ventilation shaft and weaved my way to the docking bay before anyone could lock down the vessel. I buried the memory deep within my psyche and promised to never unearth it again.

That is until I met Serias. I don’t remember how long it took for her to work it outta me, but somehow, she did. It was the last time I can recall shedding tears for anyone, and Serias told me that I never would again. That she would carry the pain in her heart for me. She vowed that no soul would ever be able to hurt me like that and if they did, she’d send them to the gods faster than light speed.

It’s those memories that burn more now than ever before. The betrayal she must feel for me when I left her all alone back on Delvis Chong, never to return. But I did it all for her…at least that’s what I told myself. What I convinced myself of. ‘The worst lie you could ever believe is the 1 you tell yourself,’ I recall Tannan telling me on the first day of Spy Guild training. And it rings true to this day.

Seeing Serias here, now, makes everything more complicated than ever before. I could give it all up, possibly tell her the truth and pray she’d take me back. But what would I ransom in return? Olia’s life for my happiness? As I mull this decision over while I stand in line for interview registration, I catch a glimpse of Serias strolling by in my periphery. She’s still as stunning as the day I laid eyes on her. I watch and wait, hopeful that she’ll turn and give me a look. Some flicker that I still haunt her memories as much as she does mine.

“You, step up,” a voice grumbles before me. I shake from my daydream and approach the table, holding out my ID card. A man reaches forward and takes the card from me, scans it 1 time and then hands it back. He points to a row of chairs to my right and flicks his wrist, ushering me over. Only 1 other person is seated. “Have a seat over there and wait quietly. You’re next. The proctor will call you when ready.”

I nod and take the ID card back. And as I step out of line, I look back, hopeful of finding Serias, but she is nowhere to be found. 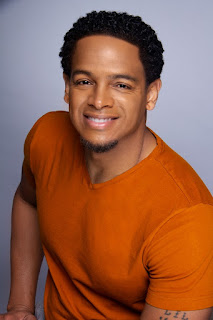 Multi-Award Winning and #1 Amazon Bestselling author Braxton A. Cosby is a dreamer who transitioned his ideas on pen and paper to pixels and keyboards. He has penned over 16 novels and written several screenplays; many based on his own works. He tells stories that evoke emotions and stimulate thought. THE STARCROSSED SAGA and THE CAPE are currently Young Adult and Superhero series he created, with spins offs for INFINITY 7: GODS AMONG MEN and his latest Bounty Hunter, scifi release, STEEL REIGN: FLIGHT OF THE STARSHIP CONCORD. THE STARCROSSED SAGA has won multiple science fiction and young adult awards, while THE CAPE has also earned recognition for its prowess as a literary fiction series. Braxton is the CEO of Cosby Media Productions and lives in Georgia with his amazing wife and a highly energetic Morkie named StarKozy. 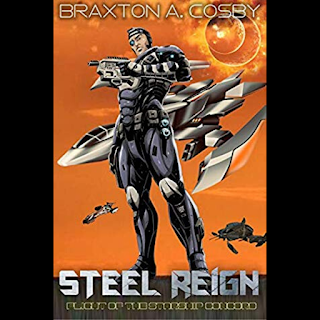