The Truth About Princesses and Dukes by Bianca Blythe (The Duke Hunters Club #6) - Adult, Historical Romance 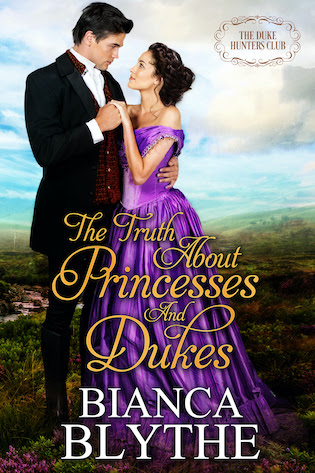 Princess Aria has been exchanging letters with the most marvelous man in the world. Perhaps her true love is somewhat aged, and perhaps she didn’t feel fireworks when they met briefly at a ball, but she is certain now that there is no man as wonderful as the Duke of Framingham. She is overjoyed when he proposes marriage.

When Rupert’s cousin, an elderly duke, tells him he’s fallen in love with a beautiful woman and needs someone to write letters on his behalf, Rupert reluctantly agrees. His cousin claims he is eager to wed her. On his wedding day, Rupert learns that the duke plans to toss her off his balcony so he can marry his mistress. The duke just wants the princess’s money, and Rupert knows he has to rescue her.

Princess Aria is astonished when she is kidnapped by a young man. She’s in love with the duke—after all, he’s sent her such wonderful letters for weeks. Soon, though, they are on the run together to London. If only Rupert were the man who’d sent her such lovely letters.

“You should not be here.” The princess raised her upturned nose and sniffed. Rupert may as well have been an unpleasant scent wafting from a cow-filled pasture.

“And you should not be murdered.”

She fixed her eyes on him. Unlike her demeanor, which was cold, as if she’d been raised by glaciers and polar bears, her eyes were a warm honey color. Something in Rupert’s heart clenched, but he shook the emotion away.

In her letters, she’d been warm and playful, but now when he was speaking with her, her demeanor was frosty. His very presence repulsed her, and his throat tightened.

But Rupert was not going to think about that. She was a princess, a duchess, and worse—his cousin’s wife. It didn’t matter how curved her waist was, how alluring her long delicate neck was, how intriguing her collarbone and sloped shoulders. He forced himself not to gaze at the ruby pendant that hung from her neck. Thinking about her ruby pendant might draw his attention to her beautiful face, or worse, it might draw his attention to her deliciously curved bosom. That generous slope was most intriguing.

No, Rupert wasn’t going to think of those things, no matter how much his heart hammered, and no matter how appealing her jasmine and violet scent was.

He was going to stop her from being murdered.

“Mad?” She huffed. “Even asylum dwellers would find it challenging to say something of equal absurdity.”

For a moment the princess hesitated. She had to believe him. She’d spent the day married to his cousin—that might be sufficient reason to believe.

“Why are you saying this?” she asked finally.

Her face paled. “He wouldn’t do that.”

“He said he would do that this very afternoon.” Born in Texas, Bianca Blythe spent four years in England. She worked in a fifteenth-century castle, though sadly that didn't actually involve spotting dukes and earls strutting about in Hessians.

She credits British weather for forcing her into a library, where she discovered her first Julia Quinn novel. She remains deeply grateful for blustery downpours.

After meeting her husband in another library, she moved with him to sunny California, though on occasion she still dreams of the English seaside, scones with clotted cream, and sheep-filled pastures. For now, she visits them in her books.

GIVEAWAY!
Bianca Blythe’s The Truth About Princesses and Dukes Giveaway