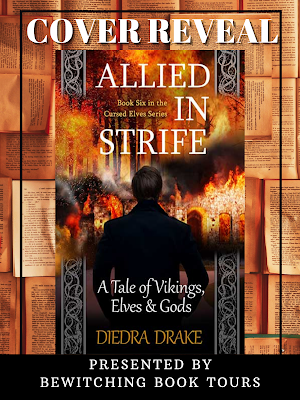 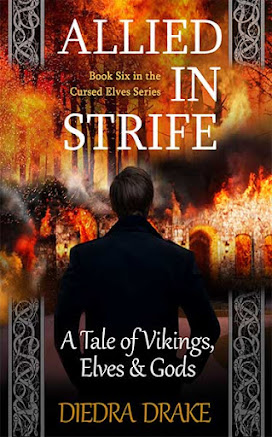 Allied in Strife
The Cursed Elves
Book Six
by Diedra Drake
Genre: Fantasy Romance / Mythological Fiction
Publisher: Apache Creek Publishing
Date of Publication: July 30th, 2021
ISBN: 9798201968410
ASIN: B0964C1SQ5
Word Count: 140,000
The Elves are a disaster. Raymond’s having trouble coping with death and letting go, Priscilla’s drowning in guilt, Nathan’s having a rocky Elf transition, and Nerissa’s dealing with recent trauma.
But Itta and Patrick are on the warpath, Clothilde hates being treated like a traitor, the Woods don’t appreciate being ordered to stand down, and a fire Priscilla lit a couple of years ago is primed to explode.
And just when everyone might be finding out how to move on, a phone call from Erasmus throws them for a loop.
In between, explore the past with a trip to Spanish Florida in 1702, and learn how Priscilla met the first Human she ever loved.
Will the past catch up with them all, or can they find a way to end the strife?
Amazon      Apple 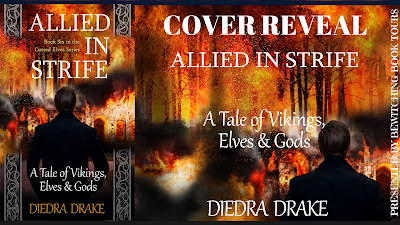 “Do you think we should try adding some kind of prayer or something?” Itta wondered aloud.

“We’re not worshippers,” Patrick responded with a shrug.

“Maybe not, but we are trying to ask for a favor. It couldn’t hurt.”

“At the beginning of the month, we brought them one sacrifice a day over three days,” he said. “Today we’re trying three all at once.”

“So you’d prefer to add only one new thing at a time until we figure out what works?”

“That’s fine,” Itta said with a smile. “It will give me time to do some research on prayers, just in case.”

“I hope that won’t be necessary, I’d like to see the Furies respond to our offering.”

They both watched from the side of the ruins as several Thornton Elves arranged the three mind-controlled Humans so they remained on their knees. The setting sun cast dark shadows against the grey stone, but the ruins remained adequately lit for their purposes.

One of the Elves approached Patrick and said, “They’re ready, Master.”

When his jaw tightened, Itta asked softly, “Would you like me to do it this time, Patrick?”

He shook his head. “No, my dear. I appreciate your offer, but I will handle this unpleasantness.”

Patrick strode purposely toward the Humans, and withdrew a dagger from his inner jacket pocket. Without hesitation, he ran it across the exposed throat of one Human, then stepped to the side and repeated the procedure twice more.

He handed the bloodied blade off to one of the Thornton Elves, and returned to his previous position beside Itta.

One Human bled out and tipped forward, dead, their mind no longer functioning to follow the mental commands. In her excitement, Itta reached out to grip Patrick’s hand and felt him squeeze back. The second fell, and finally the third.

All the Elves went silent in the ruins, and their eyes scanned the area in hopes that one of the Furies would arrive.

Minutes passed, the shadows bent with the onset of evening, and Patrick dropped her hand to cross his arms behind his back instead, his face set with irritation.
Itta shook her head and sighed, then asked, “Do you think it could be the quality of the offerings?”

“You mean they don’t meet their requirements for punishment? That they’re too good?”

“Or because they’re Human?”

He nodded thoughtfully. “Perhaps. We may need to be willing to give more next time.”

“We have time to think on it and prepare. I’ll research in the meantime and see if I can uncover anything else that might help.”

Patrick nodded and held out his arm, which she took automatically. “We knew this might not be easy. I only hope that we can reach them before it’s too late to save your family.”

“We will,” she said confidently, ignoring the Elves cleaning up behind them as she walked with him toward the cars. “And soon the Furies will punish Priscilla and Raymond, for both our sakes.”

“Our complaint is valid, so I have to believe that they will judge them in our favor,” he said.

“I may have an idea that would allow us to succeed even if we cannot reach the Furies, but it will take some time and planning.”

“I’m not willing to put my trust in another God,” Patrick said, his tone one that brooked no argument.

Itta shook her head. “I wasn’t going to suggest it. But not that long ago, Priscilla made a lot of enemies for the Forester House.”

They reached the vehicle and he paused, furrowing his brow. “Remind me.”

“The survivors of the Morales incident.”

“Ahhh. But what you're suggesting could put your own family at risk.”

“Then we’ll just have to be very careful,” she said firmly.

He held her hand as she climbed into the vehicle, then said, “I’ll give you the number of someone who can help.” 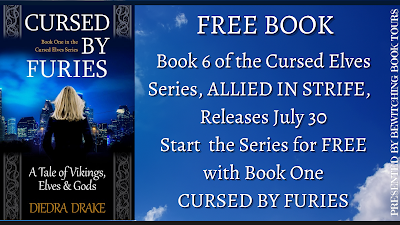 If this sounds interesting, head over to Prolific Works 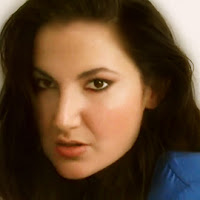 Diedra Drake is a life-long student of mythology and history, with a particular interest in the ways that different cultures tell the same stories using name variations. She is competent in classical Latin, and enjoys reading the classics – particularly Homer, Plutarch, and Shakespeare.

For relaxation, Diedra loves to crack open a new historical romance novel or binge a new series on streaming. After a couple of decades being a business owner in the technology industry, she decided to explore her other interests through the creation of a mythic fantasy romance world.

She lives in Central Texas with her family, which includes a small cat colony and a couple of dogs, and tries to ensure she gets a daily serving of ice cream for continual inspiration.