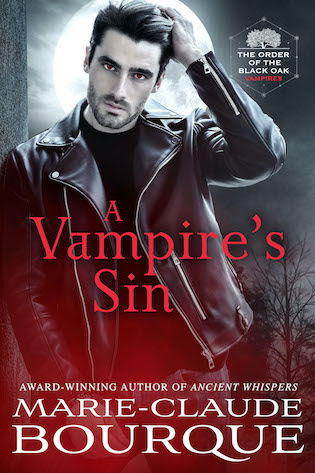 A Vampire’s Sin
by Marie-Claude Bourque
(The Order of the Black Oak – Vampires, #2)

Meet the Order of the Black Oak: a powerful order of modern-day warriors fighting evil to protect the ones they love.

Son of an ancient vampire and a legendary French witch, Mont-Royal Immortal Magnovald St-Amand has lived for so long that nothing matters except his ruling over the Montreal’s sultry nightlife. But when he chooses to help an ambitious real estate tycoon rescue her kid sister from a pack of daemons, he finds deep yearnings in his soul that he thought were buried forever.

If you love loyal tough guys with hearts, satisfying slow-burn paranormal romance and safe Happily Ever Afters, the Black Oak World is for you.

***** Fantastic series of action, magic and awesome romance. You will fall in love with the characters and feel you are right with them.

She’d come to the club to talk to him countless times in the last three months, but today was different. Today, her quest was personal.

The one she was coming to see was the most infuriating man of her acquaintances—as if nothing serious ever touched him. Keeping her persona at the highest level of professionalism was the best way to approach him.

And there he was.

She watched him work at his usual corner booth beside the bar.

Magnovald St-Amand. Owner of this trendy Montreal nightspot, his actual wealth a secret, even to her. No doubt its origin tethering between both sides of the law, some legitimate and some probably criminal.

And this time—even though it killed her to have to do this—it was the latter she had come for.

Mag, as they called him, was pouring over a pile of ledgers spread across the table and punching numbers on a printing calculator, his demeanor unusually focused on the menial task.

A nudge of respect rose with a flutter in her stomach to see him work on his own accounts.

Such a contradiction. Nothing in his laid-back facade indicated a thriving business owner. As always, his dark hair brushed his neck, the curls a little too long above the plain black t-shirt emphasizing the defined broadness of his shoulders and arms. His skin—a tad too pale to be healthy—contrasted gently with the sculpted cheekbones and dark determined brows.

And as she watched him check his calculations, she knew she had mere seconds before needing to brace herself from his immense charm.

Once his dark gaze hit her, when his lips curled into that constant amused expression he had every time they met, she would have to fight hard her attraction for the man who was nothing like her.

His life was far from the world she came from. His was late evenings and sensual pleasures. Dubious connections all over the city and the lording over its luxurious nightlife.

Hers was pondered and orderly. Charity balls and business bureaus. A continuous quest to keep her tight hold on the Montreal’s real estate power.

As she looked at him now with a slight weight lodged in her chest, in those few seconds before he would become aware of her presence, she couldn’t help but wonder if there was perhaps a possible place where they might be alike.

But that small hopeful moment was soon over.

He knew she was here.

Magnovald St-Amand slowly lifted his head. With a profound inhale, she took hold of herself as the dark undercurrent of his gaze seized her and threatened her very soul. 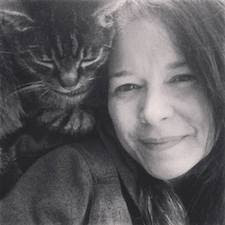 Marie-Claude Bourque is a Montreal-born Seattle-based author of gothic paranormal romance and the winner of the American Title V award with her first novel ANCIENT WHISPERS.

Happily Ever After always absolutely guaranteed!